19,000 Centrosolar modules in Northern France connected to the grid

The Centrosolar AG subsidiary Centrosolar France was the main supplier for a large-scale solar project in Northern France, in the department of Seine Maritime. On behalf of EDF Optimal Solutions, a subsidiary of the state electricity company EDF, roof-integrated solar systems with a combined output of 3.7 MWp have been installed on a total of 190 roofs belonging to the housing association “Habitat 76”. For that purpose, in total 19,000 Centrosolar modules of the type S-Class Integration Deluxe were exported to France from Centrosolar Sonnenstromfabrik in Wismar, and installed in 42 different municipalities where the municipal housing association has apartment blocks. The project started in summer 2012. The last of the 190 roof systems have now been connected up to the grid. All PV systems were roof-integrated and varied in size from 3 to 36 kWp.

This major contract has helped Centrosolar France to cement the leading position that it has carved out for itself in the French solar market over the past few years, particularly in the specialist field of roof-integrated PV technology. This market position was proved by EuPD, an independent Research Institute which conducts every year a study over French installers. In 2013 Centrosolar has been awarded No. 1 brand in the photovoltaic sector in France.

Centrosolar France has already installed S Class roof-integrated modules with total output of around 100 MWp. The new glass-glass modules from Centrosolar Sonnenstromfabrik, the S-Class Vision 60, now look set to repeat the success of the S-Class Integration Deluxe module. After 10 weeks since their market launch, Vision modules represent already 15 percent of the order book of Centrosolar France. With the USA, France is one of the principal international sales markets for the whole Centrosolar group, which generated 71 percent of its revenue internationally last year. 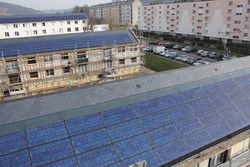