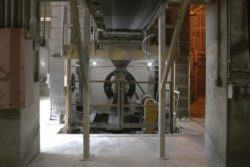 A Rotary Glass Batcher brought on line in 1980 at Anchor Glass Conatiner Corp still mixes the ingredients that produce more than a million glass containers per day.

It is estimated that over the past 38 years it has helped produce 14 trillion containers and 3.6 million tonnes of material.

Anchor Glass is headquartered in Tampa, Florida and operates production facilities in New York, Florida, Georgia, Indiana, Minnesota and Oklahoma, as well as a mould manufacturing plant in Ohio. It manufactures glass bottles and jars for the food and beverage industry.

"Glass containers have been manufactured at the Elmira, New York location since 1912 when Thatcher Glass Manufacturing operated the factory," says Michael Gesek, Engineering Services Manager, who has been with the company for 24 years.  "The location has two furnaces, one for amber glass and one for flint glass –– the industry term for clear glass," he explains.

The Rotary Glass Batcher (pictured) was manufactured by Munson Machinery Company and installed on a new glass production line, and was rebuilt in 2011.

It consists of a horizontal vessel that rotates on external trunnion rings at both ends, eliminating internal shafts or bearings that would be unable to withstand constant contact with highly abrasive materials.

"The action of the internal mixing flights is critical for mixing efficiency and blending of ingredients rapidly and thoroughly,” Mr. Gesek says.

The drum rotates until discharge is complete, preventing separation or stratification of ingredients having disparate sizes, shapes and bulk densities.

“One hundred percent discharge means no carryover from one batch to the next," Mr. Gesek says, "and we've been very happy with that."

The mixer keeps rotating while the ingredients are loaded and discharged, which Mr. Gesek says is an advantage.

“We like that it doesn’t stop between batches. We run five or six batches – 45 minutes to an hour – then shut off for half an hour, depending on production requirements. If we had to stop the mixer between batches, much more power would be required.”