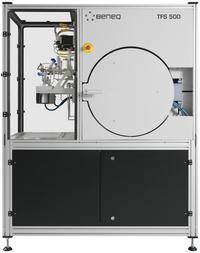 Beneq’s TFS 500 is a hands-on ALD tool for multi-project environments. Built for researchers by researchers.

Modularity and flexibility make for a natural choice

It all started with learning about Beneq’s range of atomic layer deposition (ALD) equipment at conferences. Once Argonne National Laboratory, the largest national laboratory by size and scope in the US Midwest, began looking into the systems in more detail, it became clear that Beneq was a natural choice for their ALD research needs. The Beneq TFS 500 system has offered exceptional modularity and flexibility, allowing Argonne to continue driving breakthroughs in energy technology.

A natural choice
“It was the nature of Beneq’s business approach, and the way they closely connect to the needs of researchers,” describes Dr Jeffrey Elam, Principal Chemist and Group Leader at Argonne National Laboratory outside of Chicago.

“We were really impressed. Beneq doesn’t just sell a tool or a piece of equipment. Instead, the company aims to innovate a solution by truly understanding the work that we do. To meet our specific needs, they worked very closely with us. That’s why the company was a natural choice for us,” Jeff continues.

Using technology to change the world
Argonne’s mission is to pursue big, ambitious ideas that redefine what is possible. A “dream team” of world-class researchers, including Jeff, work to solve large challenges, such as clean energy, where his team is now focused. The goal is to develop useful technologies that can transform the world.

To achieve technological breakthroughs, Argonne offers its researchers scientific facilities with a range of cutting-edge tools. As founder of Argonne’s ALD program, Jeff focuses on the R&D of novel thin film coating technologies from inception to commercialization.

Modularity – the only way
Argonne has been using Beneq’s TFS 500 for numerous projects over the last five years, including the development of large-area photo detectors. For this particular project, Argonne needed to coat large substrates with a high degree of internal porosity while maintaining excellent uniformity in both thickness and composition – a formidable coating challenge.

As Jeff explains: “Beneq has long experience with ALD that reaches back to the invention of this deposition technique by Dr Tuomo Suntola and co-workers. As a consequence, Beneq is exceptional at designing tools. When we started the photodetector project, our own process was not yet well defined. As we experimented with different ALD chemistries and coating strategies, we needed a tool that was flexible and easily adapted to evaluate our ideas,” he describes. “One of the main advantages is that Beneq’s system is modular. There really was no other way for us to do this work.”

So far, Beneq’s TFS 500 has been operating really well for the past five years. “We can use it with any development project since it’s easy to reconfigure. For instance, we can install the small, 200 mm reaction chamber to test out new chemistries using only minimal amounts of precursor. Alternatively, we can connect our large 3D reaction chamber and coat batches of 300 mm wafers to investigate the process at a pilot scale. This flexibility is really unique to Beneq.”

“We frequently encounter unexpected challenges when scaling ALD processes from small to large substrates,” Elam says. “The modularity of the TFS 500 system allows us to easily reconfigure the tool, and this speeds up our development and enables us to overcome these challenges.”

A perfect trio: researchers, Beneq and industry
Innovations in thin film technology go hand-in-hand with developments in the coating tools, as Jeff points out. “I think the best team for developing ALD technology in new areas combines researchers, tool manufacturers, and the companies that become the end-users of the technology. In this respect, we know we’ve got a winning combination with Beneq,” he continues. “They know how to appeal to researchers and also to work with companies that need to keep their production costs low. Beneq strikes a perfect balance with this,” he says.

“Our ultimate aim is to pass our solutions on to companies who can commercialize them and so have a positive impact on the world. We’ve recently licensed our ALD-based detector technology to Incom, Inc. in Charlton, Massachusetts. Beneq worked with Incom to deliver a TFS 500 to their facility that would duplicate the process we developed here at Argonne on our tool. Now they can take our work forward and make it a business success. It’s a really nice three-way collaboration story,” Jeff smiles.

Versatile research tool
“Much of our work at Argonne centers around energy – solar cells, batteries, and catalysts for biofuels,” Elam says. “And we’ve got quite a lot of different projects going on in our laboratories at the same time.”

The versatility of Beneq’s TFS 500 is well matched for this diverse research environment. “The system works really well over a broad range of temperatures, chemical precursors, operating conditions, and substrate types,” Jeff notes. “With this flexibility, we can quickly set up the tool to handle multiple projects, even in the same day. This allows us to keep on top of our programs and collaborations.”

The future of ALD technology
The commercialization of ALD technology has been extremely successful in microelectronics, where ALD coatings can be now found in virtually any piece of consumer electronics. “The challenge now,” Elam notes, “is to duplicate this success in other industries. There are many examples in the literature demonstrating that ALD coatings can improve the performance of solar cells, organic LEDs, catalysts, lithium batteries, and more. Which of these applications succeed will come down to economics,” Jeff explains. “Most of them are still far from commercial reality. It’s not enough to be better – it also has to be affordable.”

“This is an exciting time to be involved in ALD research,” Jeff says. “Many of these new applications will require ALD coatings on large, porous substrates, and this will have to be done fast and cheap. New ALD processes must be developed, and new coating tools will need to be designed,” he notes. “I think Beneq is in a position to play a key role in the success of these new applications for ALD in energy technology.”