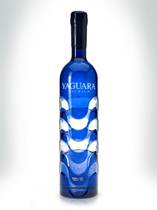 The striking bottle developed by O-I for cachaça Yaguara recently won the WorldStar Award, the most important packaging award in the world, organized by the World Packaging Organization. The ceremony was held during the IPACK-IMA fair in Milan, Italy, awarding 148 winners from 33 countries. Eighty-four of those winners attended the ceremony to receive their awards.

Produced in O-I's plant at Soacha, Colombia, the Yaguara package was created in a design partnership between renowned U.K. artist Brian Clarke and the O-I Covet(TM) team. The design of this outstanding bottle was inspired by the iconic Copacabana sidewalks, and supports the high-end positioning of this cachaça brand in the local and global markets.

Since 1970, the World Packaging Organization has given awards to numerous new packages from all around the world. In the WorldStar Awards 2015, 266 entries were received from 38 countries, and Yaguara was one of four Brazilian products that won this important recognition of packaging excellence.

"We have been very pleased with the continuing attention and awards that the Yaguara bottle has gained in many markets," said Stephanie Johnston, Covet's general manager. "We think of this beautiful bottle as a business card for Covet. This WorldStar award reinforces our commitment to continue breaking the boundaries to connect with consumers in a powerful way that only glass can do."

WorldStar awards illustrate the continual advancement of packaging design and technology, and create a living standard of international packaging excellence. "Hearty congratulations to our customer, Carmosina, for this important achievement, and to the team involved in Yaguara's production," said Johnston. Yaguara is currently available in Brazil, North America, and the U.K.