DINO ZANDONELLA NECCA IS THE NEW PRESIDENT OF VITRUM 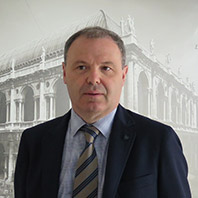 On Monday, April 20th, Dino Zandonella Necca took the reins as President of Vitrum, the international trade show specialized in machinery, equipment and systems for flat and hollow glass and in glass and processed products for industry, scheduled to take place in Milan from October 6th to 9th, 2015. Named to the Vice Presidency are Aldo Faccenda (Bottero SpA) and Cinzia Schiatti (Schiatti Angelo Srl), iconic leaders in Italy’s glass industry.

Dr. Ing. Dino Zandonella Necca served as Vice President of Vitrum last year, and is a long-time member of the Board of the firm that manages the Show. He is known internationally as a driving force in the world of glass, thanks to his work on behalf of Vitrum, Gimav and his duties as GM and CEO of ADI SpA, a company acclaimed in Italy and abroad for the superior technology of the diamond tools it manufactures for the glass, stone, ceramics and mechanical industries.

Innovation and avant-garde technology in glass processing and its many applications are the framework upon which the forthcoming edition of Vitrum and the work of Dino Zandonella Necca are based, and a seamless fit with that of his predecessor: “There will be no change in course; we will continue the journey toward Vitrum 2015 collectively mapped out last year with the members of the Board – stated the new President – We want to move forward with all the partnership activities needed to support our highly-specialized and extremely technological sector in the manner it deserves”.

“Given its concurrence with Expo 2015, which will shine the spotlight of global attention on Milan, this year’s show is especially meaningful – continued Dino Zandonella Necca – Not to mention the complementary activities to Vitrum, like the ATIV Conference, and the special projects of great cultural impact that are part of the four-day show, and will allow visitors to Vitrum to expand their knowledge through exposure to the new ideas and technologies, applications and innovative machines and major creative and cultural aspects that revolve around the world of glass”.