Solar photovoltaic (PV) module shipments from the leading Chinese companies increased 26% Q/Q in Q2’14, compared to the previous quarter when they shipped 5.2 GW of solar modules. Nearly three-quarters (71%) of all PV module shipments came from the top 20 module suppliers to the solar PV industry, according to the latest NPD Solarbuzz Module Tracker Quarterly report.

“Chinese solar module suppliers dominate the global top 20 supply group, and the amount of solar modules shipped by them last quarter was the highest quarterly level ever reached,” said Ray Lian, senior analyst at NPD Solarbuzz. “This growth comes at a time when trade disputes are creating obstacles for Chinese solar suppliers, which suggests that strategies to address the regional markets are being successfully implemented.”

Having had a very strong Q1’14, solar modules shipped by leading Japanese PV module suppliers decreased in Q2’14, due to seasonal weakness in the Japanese end-market, following incentive declines on April 1, 2014. Sharp Solar was the global leader for solar PV shipments in Q1’14, with more than 730 MW; however, Sharp Solar’s shipments declined by more than 50% during Q2’14.

To address the barriers imposed by trade disputes against Chinese solar products, companies have decided to outsource supply from overseas. Leading Chinese supplier Renesola is currently the most active company engaged in outsourcing, with about half of its module production outsourced to original equipment manufacturing (OEM) partners.

“Renesola’s outsourcing strategy has made it the leading market supplier to Europe, Australia, and India, during the past 12 months,” added Lian. “Another Chinese supplier, Canadian Solar, also expanded its module facility in Canada, while increasing shipments to its own downstream projects and to Japan, where Canadian Solar’s brand awareness has recently improved.”

Within the US market, the leading Chinese suppliers shipped more than 1 GW of modules in Q2’14, ahead of the recent preliminary trade announcement from the US Department of Commerce. During the trailing twelve-month period to Q2’14, shipments to the US from Chinese supplier Trina Solar exceeded those of SunPower, and nearly equaled shipments from leading US PV market suppliers First Solar and Yingli Green Energy.

The domestic solar PV market in China is also becoming increasingly important for Chinese module suppliers. Yingli Green Energy, Trina Solar, and Jinko Solar have been the top three suppliers to China in the past 12 months, followed by Hareon Solar, Suntech, and JA Solar.

”Leading Chinese solar module suppliers continue to have opportunities to increase shipment volumes,” Lian said. “With their domestic market in China forecast to exceed 10 GW in 2H’14, different supply strategies are likely to emerge to address local and overseas markets.” 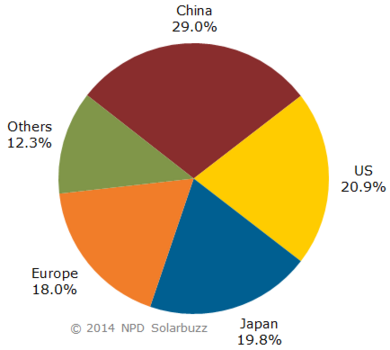