The 600m2 photovoltaic canopy, connecting the main university building’s entrance to an adjacent building, provides refreshing shades which is so important in climates such as in Morocco where the high temperature and solar radiation is prevalent. This innovative 21st century canopy pays tribute to the traditional latticework that has been a common way of creating shades in Arabic constructions.

One of the greatest advantages of the Onyx Solar photovoltaic glass is that they filter out the harmful ultraviolet and infrared radiation, while simultaneously providing free green energy to the buildings.

The challenge of accomplishing this highly efficient project featuring crystalline silicon technology has set a new milestone for Onyx Solar. The project is composed of large format glasses that have been custom designed to meet specific requirements from the client. It should be pointed out that just one glass, with 144 photovoltaic cells, has the capacity of producing a peak power of 626Wp; equivalent to 160 Wp/m2, which means 16% of efficiency. It is a real challenge!

The project was designed by two of the world’s most renowned architects, Ricardo Bofill and Elie Mouyal in which they have preserved the spirit of the Arabic latticework. Furthermore, Jacobs, a leading engineering and building services company with annual profits of $3,700 million, was responsible of overseeing the completion of the canopy.

The Mohamed VI Polytechnic University is located 30 minutes from Marrakech and 90 minutes from Casablanca. The initiative has been the first Onyx Solar project in Morocco, which is included in the development plan of “Villa Verte (Green Cities)” of the Moroccan State-owned group OPC, the first global phosphorus exporter. Its main objectives consist of focus in education, innovation, environment and sustainability.

The new city will have an extension of 1000 hectares and of 20 m2 of green spaces per capita. The Mohamed VI Polytechnic University will be the main driving force for strengthening knowledge, research and development in this new city that is also designated to be a business incubator. 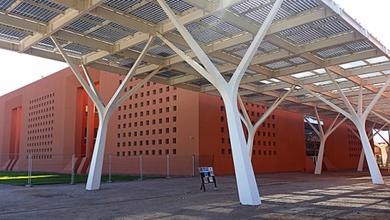