How suitable is flat glass for circular economy? 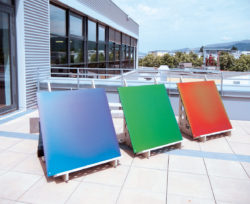 The construction sector is the biggest consumer of resources and energy in Germany. There are still too many valuable and dwindling resources used for new construction and hardly any “real” material cycles based on the "closed-loop recycling" model are used when buildings are demolished. The ift Rosenheim and the Fraunhofer Institute for Silicate Research ISC have studied how flat glass is recycled. The result: the recycling rate is already very high, but the recycled material streams do not flow back into the flat glass industry to a desirable extent. This article analyses the reasons and considers how high-quality façade glass could be turned into high-end architectural glass again at the end of its lifecycle.

By 2045, Germany is to become climate-neutral. To achieve this, the ecological transformation of our economy and society is imperative. A current example is the required decoupling of the energy industry from international dependencies and the massive expansion of renewable energies. The construction industry is facing an even more challenging transformation: an important objective of each building production design will in future be its suitability for the circular economy because only this can lead to an effective conservation of resources. The ift Rosenheim and the Fraunhofer Institute for Silicate Research ISC have been commissioned by the “Bundesverband Flachglas e.V.” (German Flat Glass Manufacturers’ Association) to determine the status quo of flat glass recycling and the possible uses for this recyclate.

Each year 1.67 million tons of flat glass are produced for building applications in Germany.

Over the same period there are approximately 521,000 tons of cullet produced in Germany. [[1]] Of these, 350,000 tons are accounted for by “end of life” glass from the demolition of buildings, the remaining 171,000 tons are already pre-consumer material ending up at the recycler. But what happens with this cullet, how do the recyclable material flow? Only 101,000 tons (19%) follow a modern closed-loop model from the recycler back to the float tank. One reason for this is that the quality requirements for the production of architectural glass are particularly high. Even the smallest impurities in the cullet would make use in modern float glass production impossible because the lines react very sensitively to the tiniest material changes and would have to be calibrated in a worst-case scenario which might cause production standstills over months. The second and probably equally important reason are the float glass prices which have been low for decades – container glass manufacturers can simply pay higher prices for the cullet and the same time are less demanding when it comes to cullet quality.

Therefore, the much larger part, namely 235,000 tons (45%), end up in container glass production, which equates to downcycling. A further 165,000 tons (32%) end up – also by way of downcycling – in the production of glass wool and other mineral construction materials. And 20,000 tons (4%) are still dumped at landfills if they cannot be used for any other purposes. However, the biggest obstacle to increasing the share of cullet in float glass manufacturers’ batches is that at 521,000 tons, there is not enough cullet available for all sectors of industry. Unlike hollow glass as produced in the container glass industry, float glass is not a fast-moving commodity – it remains in windows and façades for decades. 521,000 tons of cullet annually sounds a lot but is comparatively little compared to other materials from construction applications: over the period of one year, 214.6 million tons of mineral “construction waste” end up with recyclers in Germany. Therefore, there is keen competition for cullet which the float glass industry cannot win because base glass prices have been comparatively low for decades.

There are several ways to correct this structural imbalance and to use high-quality architectural glass again as architectural glass. First and foremost, realistic prices, because glass as a building material has been sold "below value" for decades.

Due to the scarcity of cullet one could consider “pooling” glass from old buildings more consistently by grades so that high-transmission Low-E or solar protection glazing with soft coatings is used in architecture again rather than ending up as water bottles that have largely lower demands on the quality of the raw glass – thereby closing the loop on the same quality level. Another impulse that would entail more sustainability: a “re-use” of architectural glass would even outperform recycling. Old windows and façades could in future be easier to dismantle to cleanly sort components and create true material cycles for manufacturers and/or “pollutants”. Cleaning the removed glass sheets and providing them with functional coatings again would release less CO2 than always only producing new panes – and plenty of raw materials could be saved. This would, however, only become a realistic alternative if such a re-treated pane allowed for the same value creation as the production of a new pane and if the corresponding prices were also accepted by consumers.

Simplified processes for re-use could also be achieved by way of more standardisation: let’s assume not every building – as still customary today – would be planned individually but in a series, in modular style and considering specific standard pane dimensions – then many components could be re-used far more easily. However, we need to accept that without digitalisation there can be no standardisation! The key to more standardisation are operational and well filled digital material databases like Madaster or ecolearn Infobase and 2D and 3D planning via digital planning tools such as BIM (Building Information Modelling). In the automotive industry these processes have already worked for decades – so why not in the construction industry?

Essential for the future: buildings are material banks

A typical apartment building erected in 1962 (the majority of urban apartment buildings in Germany were built between 1958 and 1968) at the end of its lifecycle still offers plenty of recyclable construction materials, as shown by the EPEA (Environmental Protection Encouragement Agency) in a graph. Local authorities have to understand their building stock as a comprehensive material storage containing valuable materials that have to be re-used: concrete, bricks, steel, glass, timber, gypsum, plastics and a lot more. A climate-neutral construction sector is not possible without a circular economy. The EPEA has calculated that there are about 2.2 million tons of raw material “stored” in some 2,400 buildings with these characteristics – 2.2 million tons of raw material that only has to be “mined”. This planned “urban mining” is the key to climate neutrality and more moderate handling of resources. Because only half of all CO2-emissions in new buildings are generated by their operation such as hot water supply and heating – the other half, the so-called “grey energy” is consumed by the production and transport of construction materials as well as demolition and “disposal”. In future, the use of grey energy and the lifecycle costs should therefore be part of a digital material and buildings passport – the required course for this should be charted by policymakers as soon as possible, so that architects, building and façade planners can already “think” of demolition in the early planning stages of each building. This will also be of essential importance for future investment decisions: investors and lenders should be able to assess transparently how the value and re-use potential of a building will develop over decades. All registered raw materials would then constitute a quantifiable asset.

The material composition of a typical apartment building dating back to the 60s makes it clear how many raw materials can be “mined” here and re-used or recycled. For a climate-neutral construction sector existing buildings must be understood as material banks.