Manufacturers of solar photovoltaic (PV) cells are increasing research and development efforts to push cell efficiencies to record levels. According to the latest NPD Solarbuzz PV Equipment Quarterly, the power rating of industry-standard 60-cell multi-crystalline silicon-based modules is forecast to reach 275W within the next 12 months.

Modules based on crystalline silicon (c-Si) cells continue to be the dominant technology used by solar PV installers today. In fact, during Q2’14, 92% of solar module production was c-Si based, with the remainder coming from thin-film technologies by First Solar and other suppliers.

During 2011, 4-6 GW of new c-Si cell capacity were added every quarter, mostly surplus to market requirements. This over-supply situation led to a rapid decrease in the number of new c-Si cell factories built in 2012 and 2013.

“New solar cell factories were expected to come online during 2H’14, especially in Taiwan,” added Colville. “The threat of import duties on Chinese and Taiwanese manufactured components shipping to Europe or the United States, however, has caused additional delays and uncertainty.”

Cell manufacturers focused on reducing costs in 2012 and 2013 by starting to upgrade printing equipment used within process steps on the front side of the cells. The upgrades reduced the quantity of silver paste used in production, which was one of the main sources of overall solar module costs.

Efficiency increases for solar cells were achieved primarily due to the use of higher quality multi c-Si wafers, which allowed industry-standard 60-cell multi c-Si based modules to reach 265W, without the requirement to perform significant process step changes at the cell stage. “To move existing silicon-based cell capacity further forward now requires new technologies to be implemented, which has the potential to drive solar manufacturing into the first widespread technology buy cycle seen within the industry,” Colville noted.

A leading candidate for efficiency enhancement today is the introduction of new advanced process stages during rear-side fabrication of c-Si solar cells. So far this year, capacity upgrades have resulted in strong growth for a specific cell variant using new equipment in rear-side cell processing, known as passivated emitter and rear cell (PERC). 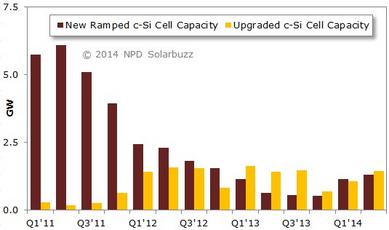