Only energy-efficient buildings are able to draw much of the energy required for heating, hot water, and other building services from the sun. Photovoltaics is a key technology in this context. However, the future belongs not to the additive installation of solar modules mounted on roofs but to integration. The StoVentec ARTline ventilated rainscreen facade system integrates environmentally-friendly energy generation into the facade of a building. Both the concealed option (Invisible) and the option with support rails (Inlay) can be combined with other facade surfaces (glass, natural stone, render, metal, or ceramics).

The increase in the prices of gas and oil are relentless. Although petrol prices made the headlines (on 20 August 2012, the Süddeutsche Zeitung proclaimed that it had never been more expensive to fill a tank with petrol), the prices of heating oil, natural gas, and district heating are constantly on the rise. Renewable energies are coming into focus. Along with biomass, wind power, and water power, primary among these is solar energy, the supply of which is virtually limitless. After all, the amount of solar energy available on the earth is more ten times the total primary energy consumption of humankind. It is now a question of tapping into this powerful potential without having to compromise on architectural and aesthetic requirements. Photovoltaics should be an integral component of today's low-energy, passive and plus energy houses.

Non-visible or rail-fixing
At the factory, the photovoltaic modules in the Invisible system are bonded with an expanded glass carrier board to form a sandwich element. The dead weight of the board, which is just 20 mm thick, is very low (10 kg/m²), as expanded glass has a high air void content. Retainers on the rear side of the carrier plate allow concealed fixing of the 1,200 x 600 mm modules, thereby creating a homogeneous facade surface. The StoVentec ARTline Inlay system works with framed elements which are set inside black rails fixed to the sub-construction. They measure 1,205 x 605 mm. With both systems, the modules can be replaced individually for maintenance and repair work.

The facade panels, which are based on thin-layer CIS (copper indium selenide) technology, are available in six colour shades (blue, red, yellow, green, black, white). Black has proved to be the most effective choice where energy yield is concerned. Coloured glass comes at the price of a reduction in efficiency due to higher light reflection. Within the StoVentec system, all active PV modules in both system options can be combined with glass, glass mosaic, natural stone panel, metal, ceramics, and render.

Comprehensive tests have proved the cost-effectiveness of the PV facade even in the case of a deviation of 30 degrees to the south-facing alignment; the only consequence was a reduction in power loss (max. 3% at an angle of 90 degrees). As part of complex lifecycle analyses, even south-east or south-west facing facades (deviation of +/- 60 degrees) produced positive results in sunny locations in southern Germany. An annual electricity yield of 55 to 80 kWh per square metre of PV module can be achieved depending on the colour scheme. In purely mathematical terms, the average annual power consumption of a family of four in Central Europe of 4,500 kWh/year can therefore be generated by an integrated photovoltaic facade measuring 57 to 82 square metres. 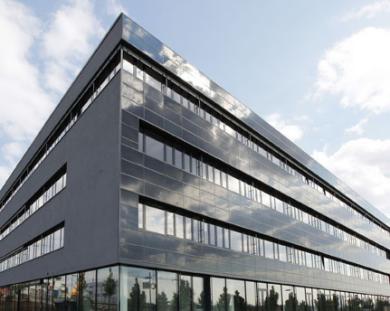