The German physicist and entrepreneur Ernst Abbe founded the Carl Zeiss Foundation in Jena 125 years ago. In doing so, he created a company model for the globally active optics and specialty glass companies ZEISS and SCHOTT that is still unique today. By establishing the Foundation, Abbe pursued his goal of continuing to run the companies ZEISS and SCHOTT independently of the personal interests of their respective shareholders in the future, assuming special responsibility for their employees and using the companies’ profits for charitable purposes, primarily to promote the sciences. The Carl Zeiss Foundation and its two companies wrote German industrial and social history by adopting this unique company model. ZEISS is a leading international company in the fields of optics and optoelectronics, while SCHOTT, a company that manufactures specialty glass products, is a global leader with many of the products it offers.

The German Chancellor Dr. Angela Merkel gave the ceremonial address at the festive event held to celebrate the 125th anniversary of the founding of the Carl Zeiss Foundation and praised both the Foundation and its companies. She noted that the Foundation Statute written by Ernst Abbe back in 1896 describes “the ideal model of responsible entrepreneurship.” Because his ideas flowed into social legislation later on, the Foundation Statute can be considered “an outstanding document of German economic and social history” she added. In reference to the companies, she said: “ZEISS and SCHOTT are known all over the world for their state-of-the-art technology ‘made in Germany.’ They are flagships of German business.” And due to their special company model, she also called them “exporters of the social market economy.”

Great historic importance
The collaboration between Carl Zeiss, Ernst Abbe and Otto Schott in Jena at the end of the 19th century culminated in two dynamically growing optics and specialty glass companies whose shares were transferred over to the Carl Zeiss Foundation. In the Foundation Statute from 1896, Ernst Abbe granted employees social rights that were completely unheard of back then and didn’t become standard elements of German labor law until decades later. In fact, the Foundation has survived all of the crises in German history even until today, including the country’s division into East and West after World War II.

Foundation model allows for a long-term focus
As part of a comprehensive foundation reform, the companies ZEISS and SCHOTT were converted into legally independent stock corporations with the Carl Zeiss Foundation as the sole shareholder in 2004. They were thus given a modern form of Corporate Governance and the entrepreneurial freedom they needed to be able to function as globally active companies. Due to their unique ownership structure, ZEISS and SCHOTT are not subject to the pressures that publicly listed companies that must meet their shareholders’ demands for quick returns face. As Foundation companies, ZEISS and SCHOTT rely on sustainable portfolio strategies and long-term success instead. 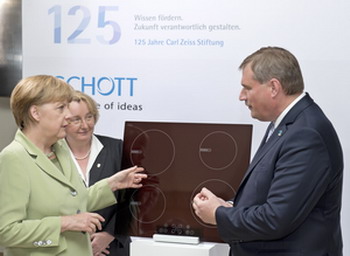