14th Forum Solarpraxis in Berlin has begun with 600 participants

At the inaugural address of the 14th Forum Solarpraxis, Solarpraxis owner and cofounder Karl-Heinz Remmers called on the new German government to finally begin the transformation of the energy system. The adjustment of the German Renewable Energy Law (EEG) is only one small part of this. "The energy transition requires a lot of hard work. We the solar industry are needed because we offer solutions," underscored Remmers at Europe´s largest non-technical solar conference in front of 600 participating representatives of the solar industry. The rapid spread of solar energy across the globe will not be slowed. "Keep persevering," he encouraged the battered German solar industry.

Against the background of the negotiations of the black-red political coalition, unrestricted discussions took place about controversial topics such as the overall structure of the electricity market, the fiscal burden of self consumption from solar energy, the introduction of capacity markets, as well as compulsory direct marketing.

Both conventional and renewable energy providers will face challenges within the current market design, clarified Dr. Maren Hille from the German Association of Energy and Water Industries (BDEW) at the podium discussion, "The energy market design of the future – Germany at the crossroads." Dr. Holger Krawinkel from the Federation of German Consumer Organisations (vzbv) argued in favor of an auction model, in order to bring about a gradual change in the market design. "When the old energy industry begins to demand subsidies, then renewables have already won," he proclaimed optimistically.

At the following session themed "World PV Outlook – A look into the crystal ball?" panel participants Reinhold Buttgereit from the European Photovoltaic Industry Association (EPIA), Rana Adib from the Renewable Energy Policy Network (REN21) and Dr. Henning Wicht from IHS Research agreed that the significance of the European market is diminishing. Having said that, there are still often surprising rapid growth markets, such as China and Japan currently. Also countries with a low level of electrification are of interest to the solar industry. The pressure on module prices continues to persist, clarified Dr. Henning Wicht and he advised module manufacturers: "Keep focusing on costs."

During the CEO Panel Stuart Brannigan, Vice President of Sales and Marketing in Europe and America for module manufacturer ZnShine, also emphasized the importance of competitive prices – both for modules and electricity production costs in general. With regard to the much discussed burden on self consumption of solar electricity, BayWa r.e. CEO Günter Haug opined: "It makes no sense to, on the one hand, fund energy storage and, on the other, tax self consumption."

On November 22, 2013, explored topics will include, among other things, alternative sales and financing models, as well as controversial themes like Guerilla PV. 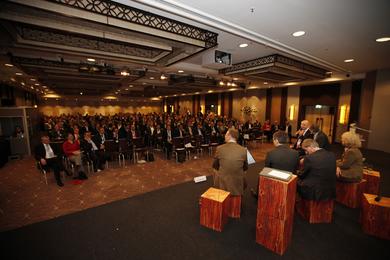