Mr .G. Clinton Shay was presented with the 44th Phoenix Award at a black-tie gala dinner, at The Roanoke Hotel and Conference Centre, Roanoke, Virginia. USA, on Friday 3th. October 2014.

G. Clinton Shay was born in East Orange, New Jersey, in 1922, and grew up in Madison, New Jersey. During World War II he served in the South Pacific with the U.S. Navy. After the war, he earned a master’s of science in mechanical engineering from Lehigh University. He joined Corning Glass Works , in 1955in their Process Research organization in Corning NY.

Clint, as he is known to his family and friends, was awarded this most prestigious honour for his work as a distinguished engineer and co-inventor of the “fusion flat glass” making process.

The fusion process, which is a method to produce thin, strong glass is now used worldwide in industries such as consumer electronics and telecommunications. One of the major products it can be found in is Liquid Crystal Display (LCD) screens, which are used in television and monitoring screens, as well as smart phones, laptops, tablets and almost all of the modern hand held devices that enables their connection to the visual digital universe.

The fusion process stemmed from a research programme that started at Corning in 1958. It found ‘limited’ success in the 1960s for use in car windshields and then in the 1970s in lenses for sunglasses. However it was the increase in the popularity of the LCD television from 2002 onwards that the process really came into its own. And since that time has been a major contributory factor in the success of Corning. The process is also used in the production of Corning’s now famous Gorilla® glass, which was originally introduced to help protect consumer electronics from the scratches and bumps of everyday use. Gorilla® has been designed into more than 2,450 product models and is used in 2.7 billion devices !

Even after retirement in 1986 Mr Shay, now 92 years old, is still engaged in the advancement of fusion technology in Corning, and continues to bring his engineering skills and talents to new ideas in research and to offer sage advice to younger engineers and research scientists, via teleconferencing.

The gala dinner was attended by more than 100 of Clint’s family, friends, colleagues and Phoenix Award committee members. Such is Clint’s esteem, that Corning Inc arranged for a delegation of 20 people, from around the world, consisting of Presidents, Executive Officers, Fusion Process Colleagues, Fellows and Senior Managers to attend the award ceremony. 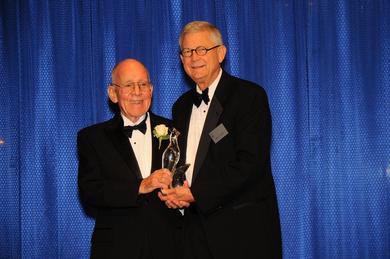