Andrej Božič received a gold award from the municipality Hrastnik

On the eve of the Municipality´s holiday, 2 July 2014, a ceremony was held in Hrastnik in order to celebrate the Municipality´s anniversary where awards for successes and accomplishments achieved by visible individuals or societies in the area are awarded. This year, the Director-General of Steklarna Hrastnik, Andrej Božič, was the recipient of the Golden Municipal Award for the work and achievements in the economic field.

In his speech Mr Božič pointed out that this is one of the most important awards along with the recognition from the trade unions of KNG workers, which he received in April 2011. He told to those who attended the celebration that the changes in Steklarna Hrastnik would not be possible without a great team. On this occasion, he thanked to all the employees, because without their cooperation and assistance, Steklarna Hrastnik would not be a successful company.

Andrej Božič, General Manager of Steklarna Hrastnik said: "I see this award as the recognition that Steklarna Hrastnik is on the right track. It is primarily an award to all my colleagues who helped to create a story of success with their knowledge and experience. I have repeated many times that employees are the foundation of our success. And once again I will stress: we would not be able to take all those steps without the staff. Employees stand behind the products of Steklarna Hrastnik. Also the support of the local community Hrastnik has helped a great deal. Therefore, as an important part of our responsibility I see the return to the local environment, in which we live in and with which we build beautiful and long-term partnership. In this spirit of partnership with the local community, I would like to point out that I will split the financial reward that I have received, between three young individuals who come from the local environment."

I congratulate to all citizens on their municipal holiday - 3 July. 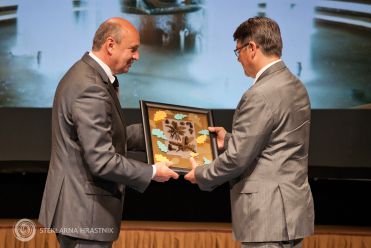