At Glasstec, a 75-year family celebration 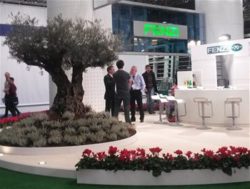 Glasstec 2016 will be a very special edition for the Fenzi Group, which has chosen the most anxiously-awaited event in the global glass industry as the perfect setting to celebrate the 75th anniversary of the company’s founding.

Fenzi’s history in the world of glass -- a lengthy entrepreneurial adventure made up of achievements, discoveries, innovations and insights -- begins in Milan where, in 1941, the company’s founder, Otello Fenzi, began manufacturing protective coatings for mirrors. Coatings that have become the most well-known and widely-used in the world, with which the company gained a commanding share of the market in the difficult post-war era, and whose production has grown exponentially, thanks to the quality of the products and first-class customer service.

In 1968 the gates to the global market officially swung open for Fenzi with the company’s first-time participation in an international trade show, in Paris, and with the launch of an overseas marketing plan. Success is not far behind and leads to a dramatic increase in production during the ‘70s and ‘80s. Fenzi North America, Fenzi China, Fenzi Belgium, Fenzi South America and Fenzi Russia -- all 11 plants -- are part of the Milan-based Group. They are the product of considerable insight and a powerful vision of the potential of markets in strategic parts of the world, a vision capable of anticipating future trends in what is now a single global market, ahead of most of the industry’s other businesses.

The strategic decision to be a complete partner for the glass industry and ongoing investments in the research and development of new products have led the group to consistently expand its production, even into other areas of the glass industry, driving the company to become a world leader in the area of sealants for IG units, decorative enamels for glass, mirror coatings, including those for solar thermal power, and machines for digital printing on glass. One example is the warm edge line distributed around the world by the Glass Alliance network (formed in 2002 by Fenzi, Alu-Pro and Rolltech), capable of achieving the highest thermal performance.

Innovation, a singular focus on glass and unwavering commitment are the three pillars upon which the Group and what it stands for today are founded – a 75-year history of entrepreneurship woven into the fabric of the glass industry – setting the standard for quality and state-of-the-art technology and making it a reliable partner for the entire glass industry. The Fenzi Group is also an extended family made up of about 700 employees around the world, witnesses to and hands-on creators of Made-in-Italy achievements on five continents.