The "Lithography for the 22 nanometer node" project, led by Carl Zeiss, has been successfully completed. This national project was part of the European EXEPT Project ("Extreme UV Litho- graphy Entry Point Technology Development") led by the Dutch company ASML, as part of the CATRENE Cluster. During the project, two Carl Zeiss companies and six other German companies and research facilities developed EUV lithography from the basic research stage to a technology which can be fully implemented for the volume production of microchips on the 22 nanometer node. Through EUV technology, Carl Zeiss and its partners play their part in the semiconductor industry's drive towards smaller, more efficient, more environmentally friendly and more affordable microchips. The project was supported by the German Federal Ministry for Education and Research (BMBF) to the tune of approx. 16 million euros in total.

EUV is an optical lithography procedure which uses extreme ultraviolet light to transfer integrated circuits to microchips. The production of a demonstrator of a first EUV projection system marked the attainment of a key project goal of Carl Zeiss SMT GmbH. The foundation was thus laid for supplying strategic partner ASML with key components of the EUV scanner in the future. "The successful collaboration for the further develop- ment of this crucial technology helped further strengthen the leading role of German companies in the area of microelectronics," summed up Dr. Hermann Gerlinger, Member of the Executive Board of Carl Zeiss AG and CEO of Carl Zeiss SMT GmbH. "We support the German site. Tar- geted support, like that from BMBF, supports us in expanding the necessary competencies."

Within the scope of the project, the partners had developed the projection system required for the lithography process, together with the necessary infrastructure. The contributions of Carl Zeiss SMT GmbH (Oberkochen) included a more powerful projection lens, a highly flexible illumination system without loss of energy, and the high-accu- racy measuring systems necessary for their qualification. IMS Chips (Stuttgart) supplied new optical elements for the precision measurement of the EUV mirror. Carl Zeiss SMS GmbH (Jena, Rossdorf) developed mask repair processes for EUV photo masks, and was supported by the Fraunhofer Institute for Integrated Systems and Device Technology (FhG IISB, Erlangen) in carrying out theoretical experiments using special EUV simulation software. Bruker ASC GmbH (Cologne) developed EUV/XUV-based metrology solutions which can be used in reflectometers for the optical characterization of EUV masks, among other applications. SÜSS MicroTec Photomask Equipment GmbH & Co. KG (Sternenfels) provided process facilities and processes for the cleaning and automated handling of the EUV masks, while Dynamic Microsystems GmbH (DMS, Radolfzell) provided facilities for the cleaning and decontamination of the EUV mask transport containers. The facilities and processes supplied by these two companies fulfill the highest cleanliness specifications. The Advanced Mask Technology Center GmbH & Co. KG (AMTC, Dresden) developed appropriate cleaning technologies for 20 nanometer technology EUV masks.

The project is also starting to bear fruit from a commercial viewpoint. Alongside Carl Zeiss, SÜSS MicroTec and DMS managed to supply the first demonstrators and technologies developed within the scope of the project to customers around the world. Thus, each of these companies has managed to carve out a place for itself in technology leadership and a significant position on the market. 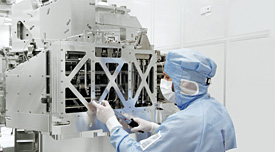