Beneq, Finnish supplier of thin film coating equipment, has joined R2R-CIGS, a high-profile photovoltaics project financed by the European Commission through its Seventh Framework Programme (FP7). The primary goal of the ambitious project is to scale-up innovative laboratory processes to meet production requirements of flexible solar modules. In short, these processes need to be adapted to roll-to-roll production while ensuring reliability, high throughput and low cost.

Says Beneq CEO, Mr Sampo Ahonen: “Beneq sees great potential in continuous production technologies, both in relation to the economy of production and the quality of the end-product. This is why we are putting down a lot of time and effort in bringing our thin film coating technologies, both aerosol coating and atomic layer deposition (ALD), to the service of the industries we address”.

Beneq is a leading authority in ALD roll-to-roll technology, having launched the first commercial research platform for spatial ALD, the TFS 200R, in 2009 and the first true roll-to-roll system for wide flexible substrates, the WCS 500, in June 2011. The WCS 500 is especially designed for production scale-up and pilot manufacturing.

R2R-CIGS, which began in April 2012 and will continue into 2015, intends to establish pilot lines for production of flexible solar panels. In all, the project is going to be of paramount importance in enabling wider application and lower costs of solar photovoltaics. The project consortium includes, in addition to Beneq, EMPA, Flisom, ZSW, Isovoltaic, SoLayTec, Mondragon Assembly, Manz CIGS Technology and CPI, and is co-ordinated by TNO. Financing has been secured from the EC’s joint ENERGY- NMP 2011 programme. 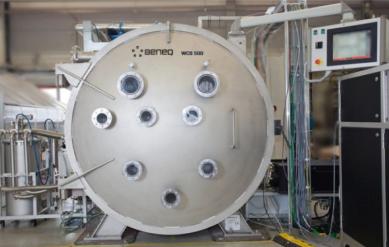