It was hotter inside the Bennu Glass factory than outside last week, but the workers here aren´t complaining.

The Port of Kalama facility made its first production-quality wine bottles last Wednesday, ushering in a new era for a plant that seemed destined for mothballs three years ago. Now that it´s running, company officials are taking a little time to enjoy their success in opening the sixth wine bottle plant on the West Coast.

"I could stand and watch it all day," Bennu CEO Jerry Lemieux said while gazing at the super-heated glass gobs zipping through the bottle machine.

After buying the plant for $64.8 million at auction in March 2010, Bennu spent an additional $35 million to get it operating again. The biggest expense was a $13 million furnace fueled by liquid oxygen and natural gas, which heats the batch to 2,700 degrees Fahrenheit and keeps the entire building warm.

The Cameron family of Pennsylvania had originally opened the plant to great fanfare in 2008, opting to power the melter with electricity, a risky technology. The company was ultimately unable to produce usable colored glass and shut down the plant in September 2009.

Bennu, which plans to produce 100 million bottles a year, is owned by New York-based financial firm Medley Capital, which invested about $30 million in the $109 million Cameron plant. Bennu plans to hold a formal grand opening in September, Lemieux said.

The Bennu furnace works fine, but Lemieux said some kinks in other parts of the plant must be worked out. For example, he said company workers are still trying to fix the shrink-wrapping machine, which encases the pallets of bottles for shipping. It´s causing a few delays.

"It was thrilling for about a day, then it just became a glass factory. It was, ´Why isn´t this running? Why isn´t that running?´" Lemieux said.

At full buildout and capacity, Bennu will make 400,000 bottles per day and ship them all over the West Coast. Lemieux said he has signed contracts with two distributors and two more are coming.

Bennu has hired 87 employees so far, including new plant manager Dwayne Wendler, who came out of retirement from glass giant Owens-Illinois. About 15 to 20 employees worked for the Cameron family before they shuttered the plant.

"There were a lot of people that had seen this plant in its darkest days," Lemieux said.

"I love it. It´s a fun job, and the people I work for are amazing," said Mark McCoy, a furnace operator hired three months ago.

Last year, wine consumption in California alone grew by 13.6 million cases, which is more than Bennu´s production capacity, Lemieux said. He said he expects the company will cut into the sales of imported bottles from Mexico, China and Italy, which control 20 to 30 percent of the market.

"We think we´ll serve this area well, but a lot of bottles will go to California," Lemieux said. 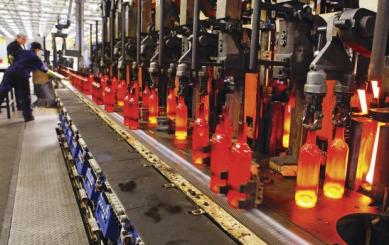