Cindy Beck said she is excited to hear that Blenko Glass Co. is back to boosting business again.

Beck and her husband, Jim, traveled from Columbus, Ohio, to surround themselves in all things glass Saturday at Blenko´s fifth annual Festival of Glass in Milton.

The couple cut lead cames and smoothed triangular-shaped pieces of glass to create their own stained-glass panels during one of the many workshops at the festival.

This is the third time the Becks have attended the festival.

"It´s good to know Blenko is doing better again," Cindy Beck said as she cut another piece of lead to separate the glass pieces. "I´d hate to see art like this lost."

Blenko Glass - which filed for Chapter 11 bankruptcy protection in May 2011 - has seen an increase in production and account numbers in the past year, Vice President Katie Trippe said.

The festival started as a localized event, Trippe said, but has since gained the attention of residents from other states.

The Becks traveled to the Mountain State for the event because they enjoy "the whole big Blenko family," Jim said.

Others visited from Texas, California, Missouri and beyond for the two-day festival that kicked off Friday, Trippe said.

"There are people with a passion for Blenko all over the United States," Trippe said. "[The festival]

is starting to grow now that people are learning we are doing this kind of event, and they truly are interested."

Martin and her husband, Scott Maxwell, got into glass-making mode for the glass-blowing workshop. With an experienced instructor, Martin and five other participants created a piece of handmade glass from start to finish.

The couple got to blow and make at least four glass pieces each for their first time during the workshop.

Martin said that, even though she accidentally dropped and broke a piece of glass, her instructor was quick to grab a new piece for her to continue the process.

She said she enjoyed learning how to sculpt a handle on one of her pieces.

"It´s exciting," Martin said. "I hope the pieces turn out at least half as well as [Blenko´s]."

Listening to what customers want to do in the glass classes has been one of the company´s significant organization successes, Trippe said.

Classes titled Glass Flower, Stained Glass Panel, Make Your Own Water Bottle and Stamped Ornament are some of the seven new classes that were offered at this year´s festival.

Class sizes range from six to 25 people, depending on how much work it takes to finish a project, Trippe said. Workshop prices cost as low as $20 to as much as $350 for the glass-blowing workshop that Martin and Maxwell joined (guests take home at least four personally made pieces from that class, Trippe said).

Festival guests created glass mosaics and bowls in the workshops stationed throughout Blenko´s factory. Visitors walked passed furnaces that were nearly 2,000 degrees and piles of broken glass sorted into colorful heaps to be recycled.

"We´re probably the only glass factory that [offers glass making to the public]. You´re getting to do something Old World, since we´re not up to date here," Trippe said with a laugh.

Blenko Glass has been a part of Carole Cline´s life for as long as she can remember, she said.

Cline, of Charleston, said her mother had a large green punch bowl, a tangerine-colored glass and a yellow lamp from Blenko. Cline owns several pieces now, including her favorite glass apples.

Cline´s sister, Suzi Davis, also of Charleston, purchased tickets to the stamped-ornament class as a birthday present for her sister. The two have visited Blenko Glass since they were toddlers, but Saturday was their first glass festival.

Davis said she remembers visiting Blenko as a child and taking a piece of glass mold that the company was throwing away to show and tell at her school.

"It´s awesome," Davis said. "I loved just being able to make a piece of glassware and it´d be my own."

For Cline, the festival gave her another opportunity to support a business that she is glad is getting back on its feet.

"Blenko is the last glass dynasty in West Virginia," Cline said, "and I´m trying to get many pieces." 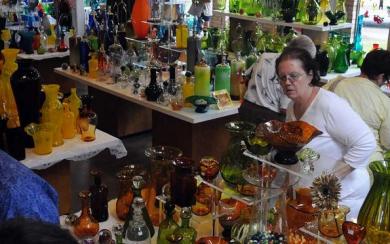