At the 6th SNEC PV POWER EXPO in Shanghai Bystronic glass will present its photovoltaic’tpa for the efficient encapsulation and sealing of photovoltaic thin-film modules. On May 16 – 18 visitors will be able to view the machine for the application of high-viscous butyl on semiconductor thin-film substrates being at work several times a day at stand 210 in hall N1. Furthermore visitors will see the new TPedge module which can be produced with significantly reduced costs.

The photovoltaic’tpa is first machine of this type that is capable of working in 24-hour operation without any interruption. Two high-performance pumps ensure that the viscous sealing material is always available. Whereas the use of the conventional butyl sealant stripes from a reel is permanently linked with production interruptions when the material needs to be changed. The dosing pumps of the photovoltaic’tpa apply the material accurately to a tenth of a millimetre. Depending on the film thickness, the application thickness of the butyl varies between 0.5 to 1 millimetres – with the most precise application.

The technology of Bystronic glass is based on decade-long experience in the design of machines for the production of insulating glass, where thermoplastic material is applied as spacer between the glass plates. In the solar power industry, horizontal machines as well as vertical designs are used for sealing all types of semiconductors – cadmium-telluride (CaTe), copper-indium-diselenide (CIS), copper-indium-gallium-selenide (CIGS), microcrystalline silicon (µSi) or amorphous silicon (aSi). The machine can be included at the planning stages for newly designed plants, but can also be integrated into existing systems.

Halving the cost in the module production with TPedge
Furthermore Bystronic glass shows the TPedge module at EU PVSEC, a wafer based solar module which can be produced significantly faster and cheaper than standard wafer modules. The savings in time and costs are due to a simplified module structure and a completely new production technology. The solar cells are conventionally linked together and then fixed between two glass panes. The films and the corresponding lamination can therefore be completely eliminated. The edge sealing of the TPedge module is done by the application of a thermoplastic material (TPS®) at 130 °C so an additional aluminium frame is not necessary.


Due to the draught and stress-free, flexible bonding of the solar cells in glass composites, the new production method is best suited for the even thinner solar cells. The finished module is completely resistant to environmental influences such as rain, snow or wind loads, and extremely resistant to UV radiation. As the structure is simplified, the modules can be recycled much more easily at the end of their product life than the conventionally produced modules: in order that the materials can be disposed of separately the films are easily separated again.

Bystronic glass has developed the technology for the TPedge production in cooperation with Fraunhofer-Institute for Solar Energy Systems (ISE). The TPedge module production ranges can be designed with various expansion stages. In the serial production line, it is possible to manufacture a module in under a minute – compared to the usual standard procedure of 16 minutes. The new production principle is aligned to the seal technology used in the insulating glass production technology. The development of the so-called TPedge process, used in the production of modules with a thermoplastic sealing at the edge of the glass, features a major innovation leap in the entire module production. 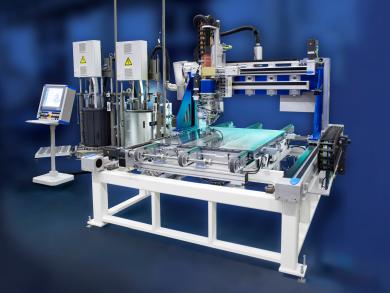