Havells Sylvania celebrated two major events at Erlangen during 2013; in February the LED production line was launched and now a new administration building has been opened. At an Open Day on 18 December, the building was officially opened by the Bavarian Interior Minister Joachim Herrmann.

Havells Sylvania has every reason to celebrate and wants to continue on its course for expansion. Early on, the company invested in LED technology and sets new standards in this category daily. For example, LED tubes have been manufactured in Erlangen since February 2013. The motto "Made in Germany" stands not only for high quality, but also for short distances, especially in sourcing materials, and the company places a great emphasis on its contribution to environmental protection.

The sales and marketing departments have now been brought together in one location at Erlangen. Previously they were partially based in Frankfurt, and this relocation ensures short lines of communication and reinforcement of the site in Erlangen. The brand new building was opened in a ceremony by Interior Minister Herrmann. Speaking at the event, he praised the commitment of the traditional company in Erlangen and is pleased with the pioneering LED production, which is unique in the region. The new building is also home to Havells Sylvania’s new flagship showroom and represents the wide range of lamps, luminaires and control solutions offered.

Havells Sylvania is an established company that can look back on a 90 year history in 2014. The manufacturing base in Erlangen was commissioned in 1968 and is an impressive 55,000m². The main products manufactured at the site are fluorescent tubes but the company also develops and manufactures special lamps for demanding clients such as the aerospace industry, requiring consuming certifications and strictest standards in terms of quality. In addition, Havells Sylvania is a leader in niche markets. These include lamps for aquariums, solariums, are insecticides and germicides as well as UV photo- cells. Currently, about 200 employees are engaged in production and approximately 60 employed in sales and marketing.

Havells Sylvania has a total of 18 manufacturing facilities, located in India, Europe, Latin America and Africa. The production facilities in Germany and Belgium are among the most innovative and the European logistics center in France ensures fast delivery.

With brands Concord, Lumiance and Sylvania, Havells Sylvania offers a wide range of lighting solutions from halogen spotlights right through to the latest LED products. The company is one of the few that can offer both lamps and luminaires, thus implementing solutions for high performance. In this case, energy efficiency and environmental protection play an important role. Low power consumption and long life of the products are as important as environmentally friendly production and disposal here.

The Havells India Ltd. Group is one of the largest and fastest growing manufacturers of electrical components and systems in India. With 94 subsidiaries and sales offices and 8,000 employees in over 50 countries, the Group achieved a turnover of 1.25 billion U.S. dollars.

"The successful run of LED is unstoppable but it seems that this means the cards are reshuffled in the lighting market. Technology companies are new in this market and renowned lamp manufacturers need to make the right decisions in order to maintain their market position. Havells Sylvania is already one step ahead. By consolidating in recent years, we are now on course for growth and can build on this sound basis. As a financially strong company, the massive investment we have placed in LED technology and lighting equipment make us as a strong and reliable supplier partner," said Co Braber, managing director of Havells Sylvania Germany GmbH. 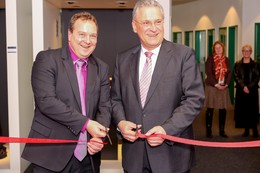