“Wrestling with Gravity” is the winning image of the Carl Zeiss 2011 Photo Contest, which explored the theme „Every moment tells a story”. Israeli photographer David Mor shot the photo in Jerusalem. It shows a young man who pushes a packed cart of fresh bagels and bread up the steep steps of the Old City. Each day, the man repeats this strenuous journey, from the lowest point of the Old City to the highest point near Jaffa Gate, in order to get to work.

The Carl Zeiss jury nominated this image for the shortlist because it perfectly fits the motto of this year’s contest: to photograph a moment in which you not only see a subject but also a story. “‘Wrestling with gravity’ has great expressive and symbolic power.The man is single-minded in his determination to push his cart to the top of the Old City, no matter how difficult it is,” said Martin Dominicus, Head of Marketing of the Carl Zeiss Camera Lens Division, in describing the scene. “We were impressed with the high quality of this winning image, but also of the other submissions. The participants approached the theme with a lot of creativity and used very high standards in capturing special moments. The diversity of experiences depicted in the different images shows just how unique photographic stories can be.”

The small, personal everyday experiences that people have play a central role in David Mor’s photography. Mor walks frequently through the narrow alleys of Jerusalem’s Old City to find and photograph such moments. His efforts paid off handsomely in “Wrestling with Gravity”. Mor used the Carl Zeiss Makro-Planar T* 2/100 ZF lens.“The moment shown in the picture reminds me immediately of Sisyphus, whose punishment was to roll a boulder up a steep mountain,” he says. But whereas this task was meant to punish Sisyphus, Mor’s photo shows exactly the opposite: the young man begins each work day full of expectation and hope.

The contest with the theme “Every moment tells a story” was held from December 2011 until January 2012. Photographers from around the world were invited to capture their ideas in exciting images. Anyone could participate as long as the image was shot with a ZEISS lens. The contest was held for the second year in a row on Flickr. Group members were not only able to follow all submissions, but also to vote on the winners from a shortlist nominated by the jury. The members of the Flickr community selected “Wrestling with Gravity” as the winning image from a shortlist of 17. Nearly 800 votes were cast on Flickr during a two-week period. “Wrestling with Gravity” was the clear winner with 257 votes.

The second prize goes to Mac Kwan from China. His photograph shows a young boy who appears under a bridge with this father. While the boy and his shadow are visible, only the father’s shadow can be seen; it is projected against the wall of the pier. Yet this moment is enough to know that both are happy: the father will always be there for his son as he grows up, even if he is not always physically present.

The third-place winner is Maurizio Lattanzio from Italy. His photo reveals a shadow that also tells a story. The image shows a man on a bicycle; he appears to be riding on a tightrope. A moment of weightlessness and playfulness is created, and it is only at second glance that the viewer realizes that the unusual vantage point has created an illusion. 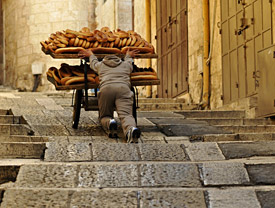