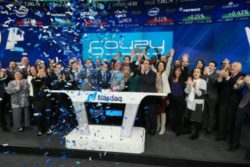 The material science specialist Gauzy will build its second factory to produce smart glass by Research Frontiers in Stuttgart, Germany.

It has partnered up with developer Research Frontiers to produce SPD-Smart light control film, including automotive and architectural applications.

Eyal Peso, CEO of Gauzy, said: “Our manufacturing facility will be strategically located in Stuttgart, Germany near our key automotive customers.

"We have already completed five months of design work and have acquired the production site.

"We are investing millions of euros to build this state-of-the-art facility with specifically-designed coating and curing areas that will give Gauzy the capacity to coat over one million square meters of SPD film per year.”

Mr Harary said: “Gauzy is not only a key licensee of ours, but they are also a strategic investor in Research Frontiers. Gauzy has consistently shown their ability through innovation and investment to bring the best quality products to the smart glass industry.

"Their new SPD film production line will have special in-line production capabilities that do not currently exist anywhere in our industry.

"These capabilities address beautifully the needs of our licensees and their customers in the automotive, train, aircraft, boat and architectural industries.”

Gauzy expects the new facility to be in production within the next six months. The company will host a special invitation-only event for industry professionals, key customers and media later this year to launch the new production site. It can coat SPD light-control film as wide as 1.8 meters.

SPD-Smart light control film, invented and patented by Research Frontiers, is a key component in SPD SmartGlass products. The film allows users to instantly, precisely and uniformly control the shading of glass or plastic products, either manually or automatically. Products using Research Frontiers’ smart glass technology are being used in tens of thousands of cars, aircrafts, yachts, trains, homes, offices, museums and other buildings.