Construction of the glass plant in the Far Eastern Khabarovsk will begin in 2012 and will be completed, as planned, in 2014, reported Reap "Khabarovsk online", the press service of the government land.

Modern enterprise can provide manufacturers of glass containers Far intended for food, fish-processing, pharmaceutical industries. To date, container transported from other regions of Russia, increasing the cost of business and, as a consequence, the cost of production.

The meeting on the prospects of the production base edge representatives of the Government, the President of Carlsberg Group, Jorgen Buhl Rasmussen, President of "Baltika" Isaac Sheps, General Director of "Nut-Zuevskaya Glass Company" Alexander Moschitsky.

The implementation of such an important project for the development of the industrial base of the region is made possible by a treaty between the major Russian producers.

"Producers, whose power is based on the province, are willing to buy up to 40% of the production of a glass factory. New venture - a guarantee of stable development. Completion of work, the company will provide the regional budget stable tax deductions, will create up to a thousand jobs for the residents of the region. For the economy - it's a definite plus ", - said Vyacheslav Shport.

The outcome of the event was the signing of a cooperation agreement between the Government of the Khabarovsk Territory and manufacturers. 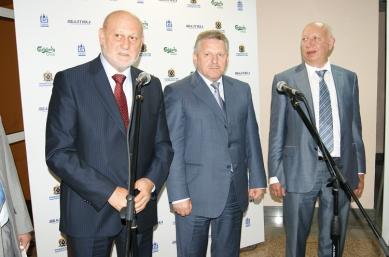