The British renewable energy company Solarsense has installed a PV plant on the roof of the UK’s first shopping outlet, Clarks Village, using especially eco-friendly PV modules from the Scandinavian-German manufacturer Innotech Solar (ITS). During prior testing on a reference site, Innotech Solar modules outperformed the products of three well-known manufacturers.

The 500 m2 80 kWp solar PV system will generate more than 70,000 kWh of electricity each year, making a substantial reduction to the running costs of the shopping outlet while reducing its annual carbon footprint by more than 37500 kg. The outlet, the first in the UK and now celebrating its 21st year, will receive combined benefits from the Feed-in Tariff and utility bill savings of more than £15,500 per year for the next 20 years, putting them in good stead for the next period in their history.

As with many commercial solar installations the Clarks Village system needed to perform in terms of generation and also from a visual and environmental perspective. With more than 4 million annual visitors the system was a clear demonstration of the outlet’s environmental commitment. By specifying Innotech Solar modules Solarsense was able to provide a system that met all of their customer’s needs.

Solarsense is dedicated to installing PV systems of the highest quality and conducts ongoing product testing to ensure the strongest and most reliable returns for their customers. Again, the Innotech Solar modules have been shown to deliver, as Stephen Barrett, Director of Solarsense, explains: “Solarsense has been running a parallel test with ITS modules versus three other big brands on our own roof at Helios House. Of the four 12.5 kWp arrays we have installed, ITS is out-performing the other brands by as much as 8%. It is good to see that the greenest module on the market also has the highest yields.”

“We highly value Solarsense as a very reliable and strong partner in the South West of England. They sharply focus on quality, sustainability and customer needs while planning and building PV projects and this is perfectly in-line with our core values,” states Jerry Stokes, CEO of Innotech Solar. 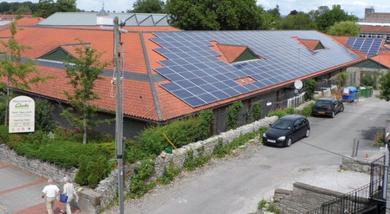