Hanwha Q CELLS, the largest European photovoltaics provider, banks on self-consumption of PV electricity for its headquarters in Germany. The company has put a 500 kilowatt PV system into operation on the rooftop of its own car park. The plant comprising of about 2,000 Q CELLS modules will produce around 9,44 gigawatt hours and save around 5,000 tons CO2 emissions over a period of 20 years. The system’s east-west orientation doubles the performance density compared to a south orientation and maximizes the yield based on the available roof surface. Furthermore it covers performance peaks during longer time periods per day through lengthening power production time and avoiding the noon spikes which are typical for south oriented solar systems.

Hanwha Q CELLS will consume 100% of the electricity from the system on-site. The rooftop plant will power the R&D center and the production lines as well as the office buildings at the company´s headquarters in Germany. Thus the PV provider shows that on-site consumption of self-produced solar electricity sustainably reduces operating costs and pays off for industry and commerce – in Germany and beyond.

The half megawatt PV facility was built in just 11 days. “Despite bad weather conditions we succeeded in completing the PV plant in very short time,” said Lutz Novy, Project Manager of Hanwha Q CELLS’ Facility Management. Andreas von Zitzewitz, COO at Hanwha Q CELLS added: “Producing and consuming our own solar electricity makes a lot of sense for us, both in economic and in ecological terms.” As a company from the renewable energy industry Hanwha Q CELLS aims to further increase the part of on-site produced green electricity at its site in Thalheim. The PV system thus contributes to the sustainability strategy of the company.

Secondly photovoltaic systems are perfectly suited to lower the overall electricity cost by reducing expensive peak demand. In the case of Hanwha Q CELLS these peaks happen during the summer months, when the production lines require energy intensive cooling. Here the PV system is especially valuable, because it covers the peaks of electricity needed during the sunniest and thus hottest days between June and August. This so-called “peak shaving” leads to lower peak demand for electricity from the grid. The PV system enables Hanwha Q CELLS to save approximately 8% of the annual peak demand cost. Andreas von Zitzewitz said, “Hanwha Q CELLS just like any commercial or industrial company benefits from self-consumed PV electricity in two ways: Firstly it sustainably decouples the operating costs from constantly rising electricity prices and secondly it reduces the expensive peak demand costs by lowering the company´s peak consumption.” 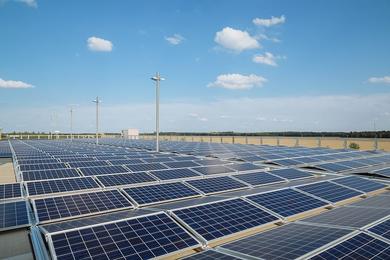