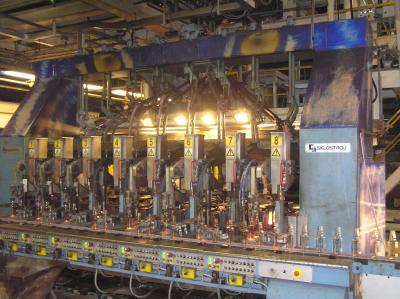 ISS is an IS Machine, a so called Individual Section machine. The additional S in the ISS stands for Servo. So in our case it is and Individual Section Servo machine. The Servo concept is not new. However, compared to other industries the Container glass business is quite late in implementing Servo Technology into its applications. During the last 10 years only a very few mechanisms have been developed, using the Servo Technology. As Sklostroj has good experience with Servo axis and Technology since roughly 2002, this approach was taken into consideration when developing an entire new IS machine platform, the new generation IS machine so called ISS machine has a huge number of Servo Axis and there can be depends on set up and demand of the customer up to 20 Servo Axis per Section. This is the highest number of individual Servo motors per section if compared to any other IS machine supplier worldwide. Thus creating the least consumption of pneumatical pressed air and therefore saving up to 40% of Energy costs compared to ordinary pneumatical driven IS machines. We have confirmed these figures from our customers which use such machines already.

What unique parameters it provides ?

The new generation ISS machines provides lowest Energy consumption, reduced noise level, high speed production, quality improvements and downtime reduction because of superior accessibility to all servo axis and modules. Therefore the best Price / Performance Ratio. The entire HW and SW, means the Time&Drive System is fully based on 100% standard Siemens Components and they are available everywhere, means no expensive dedicated spare parts are required to be keept on stock of glass plants and thus further lowering costs with no compromise to quick access to spare parts and local service.

The ISS machines comes as a standard as well with a high tech Servo controlled Feeder Mechanism. The so called DS-P5-1. The Servo Plunger Mechanism has an individual Servo axis for each Plunger which mechanical moving parts are in a permanent oil bath, the Servo motors are water cooled, and individually controlled for each Gob. The Servo Feeder can be provided from 1 to 4 Gobs, including Multi Weight Gob Feeding Function, Rotary Tube with Graphite Bearing and Servo Micro-Lifting in steps of 0,01 mm for NNPB and PB production. Attached to this advanced Feeder Mechanism is a Servo parallel Shear Mechanism which can handle up to 240 Cuts per Minute or up to Feeder output and as a basic precondition for quality cut, the shears are designed to excellent stiffness. The Automatic high pressure lubrication secures long lifetime of the mechanism. The GOB weight consistency is +/- 0,5 gram repeatedly and the exchange of the shear blocks takes only 3 minutes during job change or exchange of the shear blades. All centre distances are possible on one ISS machine platform! For SG, DG, TG, QG.
For example for Double Gob: CD4 ¼”, CD5”, CD51/2”, CD6”, CD61/4” or for Triple Gob: 3”(6”), 41/4”(81/2”), 5”(10”) and in Quad GOB in 70 mm, in 3” and in 95 mm.
On the ISS section itself there is a Servo Baffle Mechanism, a Servo parallel Mould open& closing Mechanism on Blank and Blow Mould side, further there are Servo controlled Invert and Neckring Mechanism, Servo or proportional valve controlled Plunger Mechanism, Servo controlled Takeout and Blow Head Mechanism, Servo controlled 360° Axial cooling with adjustment possibility for each mould half and each mould quarter by Servo controlled flaps. None of the Servo motors are located in the section box; therefore they are not in the hot area with bad accessibility and enabling Electro & Maintenance and Service personnel to work not in danger of hot glass. Therefore a better and faster Service is possible with lower risk and less production loss.

The very low Energy consumption, despite the many Servo axes is reached with a so called Active Line Module (ALM) which comprises a controlled energy infeed and recovery unit and works with sinusoidal input currents, that means practically without circuit feedback. The DC link voltage is controlled and can be set. With cosφ=1, this is also the most economic variant.
Besides the advantages of Smart Line Modules, this also includes other benefits such as:
Operating safety increased through the compensation of line breakages, up to 30% increased utilization of mains cables and transformers, that means cost saving due to reduced connection power, reduced cable cross-sections and weaker transformers, Superior torque quality, Excellent field weakening operation, Compliance with the applicable regional standards due to lack of circuit feedback, Comprehensive diagnostic features enabling network monitoring. Also the Higher voltage in DC link gives you the chance to increase dynamic of the fast mechanisms. Further it increases the voltage stability during line voltage fluctuation.