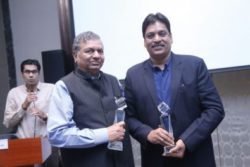 The first C K Somany Award for Innovation and Technology in glassmaking has been given to Mr. Sushil Jhunjhunwala, Vice Chairman of La Opala.

The jury acknowledged his valuable contribution in the fields of technology, manufacturing, innovation, services and education.

In addition to being a key personality at La Opala, a specialist Indian producer of opal and lead crystal tableware, Mr. Jhunjhunwala has served as President of the AIGMF and the Eastern India Glass Manufacturers’ Association (EIGMA).

“La Opala has always been very active in the field of innovation and every year the company is honoured to receive prestigious awards,” he said.

“However, to personally be the first winner of the C K Somany Glass Award is extra special for me. Mr. Somany was like my guardian and was such a warm person.

"He was the Indian glass industry’s figurehead and was always very open to offering technical assistance and advice. He is greatly missed.”

The C K Somany Glass Award was conceived to recognise the exceptional contribution to the Indian glass industry made over many decades by Mr. Somany of HNG.

"He passed away in May 2017 having headed India’s principal glass manufacturing group for more than 60 years."

The ceremony took place during the AGM of the All India Glass Manufacturers’ Federation in Delhi recently.

The AIGMF also awarded Piramal Glass the Balkrishna Gupta Award for its contribution to glass exports.

Mr. Sanjay Jain of Piramal Glass said: “On behalf of Piramal Glass, we would like to thank the jury of AIGMF for selecting us for the Balkrishna Gupta Award of the year 2017-18. The award is prestigious and Piramal Glass appreciates AIGMF’s acknowledgement of its performance.”

Raj Kumar Mittal of Mittal Ceramics, Firozabad was also nominated as the new President of the AIGMF.