Germany’s Mage Solar has installed more than 650 PV solar modules atop a 50-story skyscraper in New York City, making it one of the largest solar installations in the “city that never sleeps” and also, at 225 metres above the street, one the highest photovoltaic systems in the world.

The Ravensburg (Germany) based company supplied its Mage PowerTec Plus modules to create a 122 kWp system. In a written statement the company said the initiative shows that PV can successfully be installed on almost any roof.

"Solar energy from your own roof is not only worth it for owners of their own homes. Commercial and industrial roofs have great potential for photovoltaics," said Norbert Philipp, CEO of Mage Solar AG. "Companies are aware of their responsibility for the environment and are betting increasingly on sustainability in generating energy. That pays off double here: ecologically and economically." 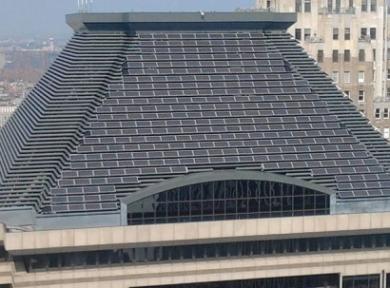