Demand was initially brisk for the high-end monocrystalline silicon solar photovoltaic (PV) panels manufactured by Helios Solar Works at a new, highly automated 50-MW capacity factory on a brownfield industrial site Milwaukee’s city leaders designated for redevelopment and growth. That is until last summer, when founder Steven Ostrenga began noticing “a deep dive in [solar panel] pricing coming out of China that we just couldn’t meet.”

Helios’ silicon solar PV manufacturing business got off to a good start, and the company added a second shift, bringing its workforce to 34 as of last summer. That’s when heavily subsidized imports from China really began surging into the US market, bringing prices below Helios’ cost of production, as well as the cost of production in China, Helios and fellow Coalition for American Solar Manufacturing (CASM) members assert in anti-dumping and unfair trade petitions filed with the US Commerce Dept. and International Trade Commission.

Competition is fine and good; it’s a prerequisite for a healthy, market-based capitalist system, but China’s been flaunting agreed-upon international trade rules established by the World Trade Organization (WTO), harming competitors in the US and other WTO member countries, Helios and CASM assert.

“We have a very high-end, efficient product, and we were priced, we believed, competitively. We have an automated facility and a good product priced competitively. Then starting in the summer last year, there was a deep dive in pricing [of silicon solar PV panels] coming out of China that we just couldn’t meet. It’s below their cost [of production], I believe, certainly our cost,” Ostrenga told Clean Technica.

Taken alone, Helios’ expansion doesn’t seem like much. However, solar and renewable energy will be key drivers for economic and jobs growth for decades to come, offering the US a chance to build a distributed clean energy infrastructure and re-establish a manufacturing base that has been on the wane for decades.

“We’re an automated manufacturer. We’ve hired across the jobs spectrum– MBAs and electrical engineers, accountants, people with technical degrees and skills and high school grads,” Ostrenga pointed out, “a lot of direct labor positions, which is a good fit in Wisconsin.

Some 23% of all jobs in Wisconsin are tied to manufacturing, he noted. “People with technical, high school degrees are looking for jobs, and we fill that need. We provide health benefits and we believe we provide livable, full-benefit wages and salaries that people can live on.”

Helios Solar Works isn’t alone. It’s among a dozen US solar PV manufacturers “that have been forced to downsize as a result of dumped and subsidized Chinese imports of solar cells and modules,” according to a CASM press release.

“At a micro level, I can speak for Helios. We’re not on plan. We’re operating just one shift now, and we prefer to be operating on two. There’s still a lot of product out there on the market from China,” Ostrenga said in the interview, noting that in July 2011 alone, US imports of Chinese silicon solar PV cells and modules exceeded that for all of 2010.

Surging US imports of Chinese silicon solar cells and modules in 2011 resulted in an abrupt reversal of what had been one of the rare instances of a US trade surplus with China. The US balance of trade in the solar PV sector as a whole was a negative $1.635 billion in 2011. That compares to a surplus of between $247 million and $539 million in 2010.

The spike in Chinese silicon PV exports to the US, Ostrenga and CASM believe, came in anticipation of CASM filing dumping and countervailing duty (CVD) petitions with the Commerce Dept. and ITC in order to avoid the tariffs that might be imposed.

As it turns out, that’s looks very likely. Having initially found in favor of CASM’s petitions, a Commerce Dept. ruling on the imposition of countervailing duties is expected to be made public March 20. A Commerce Dept. ruling on Chinese dumping of silicon solar PV in the US is going to be delayed until May, according to an unofficial notice CASM’s legal team at Wiley, Rein recently received from the Commerce Dept.

The precipitous decline in solar PV prices has been benefiting buyers and solar energy systems developers and integrators…over the short term, according to Ostrenga and CASM. The extraordinary fall in prices has been moving up the supply chain and is putting pressure on suppliers of mono and polycrystalline silicon, the raw material from which silicon solar PV cells and panels are made.

“Polysilicon is as low as $20 per kilogram,” Ostrenga told Clean Technica. Speaking to polysilicon producers, “some of them say that’s unsustainable, so it’s creeping up the supply chain. We have to have some margin out there. Right now, the cost [of silicon solar PV panels] at a modern factory gate is $1.00-$1.25 per Watt, depending on the type of module.”

At the end of the day, Helios Solar Works isn’t shying away from competition. “We’ve invested in a modern manufacturing facility and we want to add capacity and hire people.

“What we want is a fair playing field. What that does is foster a competitive industry. Prices will continue to decline and you’ll have healthier companies out there, a more stable industry that can support the warranties on these products.

“Look at Chinese firms like Yingli– it’s just not sustainable,” Ostrenga said. “If you’re an integrator, it’s great, but longer term, it’s preferable to have more and healthier suppliers out there for a healthy growing industry.”

The imposition of tariffs on Chinese silicon solar PV imports isn’t stopping the Chinese export juggernaut, nor is it preventing China’s biggest solar PV manufacturers to cut back on production. In fact, some are pressing their advantage and announced that they will be boosting production further in 2012.

In its recently announced 12th Five-Year Plan for the economy, China’s Ministry of Industry and Information is mandating that Chinese solar PV manufacturers significantly increase production and produce 5 gigawatts (GW) worth of solar PV modules by 2015 in order to bring their cost down to 0.8 yuan ($0.12) per kilowatt-hour (kWh).

It’s hoped that the Chinese government’s plans to spur domestic demand will take up much of the increased production, but China’s been saying it would do that for years now. Nonetheless, more than 90% of Chinese solar PV is being exported, offering little or no solace for US and other foreign competitors or improving prospects for a growing US solar PV manufacturing base and solar energy industry manufacturing jobs. 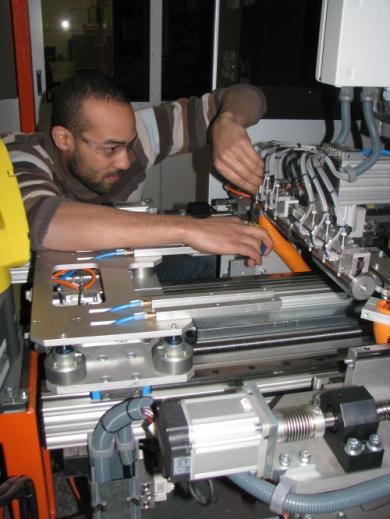