On March 21, 2014 U.S. Senate Majority Leader Harry Reid (NV) joined representatives from the Moapa Band of Paiutes, executives from First Solar, Inc. and the Los Angeles Department of Water and Power (LADWP), as well as other community, government and energy industry leaders to celebrate the start of construction of the 250 Megawatt (MW)AC Moapa Southern Paiute Solar Project. The project is located on the Moapa River Indian Reservation just north of Las Vegas, and has a Power Purchase Agreement (PPA) with the LADWP to deliver clean, solar energy for 25 years to the City of Los Angeles.

"The event marks a very important milestone for Nevada, the Moapa Band of Paiutes, and tribal nations throughout the country," said Reid. "The Moapa Southern Paiute Solar project is the first utility-scale solar project on tribal land and will deliver much needed economic benefits to the Tribe and Nevada. It will also create about 400 construction jobs, and replace dirty energy with clean solar power."

The power plant, anticipated to be fully operational by the end of 2015, is expected to generate enough clean solar energy to serve the needs of more than 93,000 homes. This amount of renewable energy will displace approximately 313,000 metric tons of carbon dioxide (CO2) annually—the equivalent of taking about 60,000 cars off the road.

The project will play a key role in LADWP's efforts to build a clean energy future by expanding renewable energy to 33 percent of its total power supply and eliminating coal power. Solar energy from the Moapa plant will contribute 2.4 percent toward LADWP's renewable energy portfolio. This transformational goal also includes reducing energy use by at least 10 percent through energy efficiency measures; expanding local solar and other forms of distributed generation; initiating a robust demand-response program; and rebuilding local power plants to better integrate renewable energy and be more flexible to meet peak demand.

"The Moapa Southern Paiute Solar Project is a significant step toward the Los Angeles Department of Water and Power's effort to achieve a major transformation of the city's power supply—one that has greater reliance on renewable energy resources and zero coal power," said Marcie L. Edwards, LADWP General Manager.

For the Moapa Band of Paiutes, the utility-scale solar project is an ideal opportunity for the Tribe to create economic opportunities while preserving the land and their cultural heritage. "This is an important step in becoming a leader in Indian Country and will help to create a model for other Tribes to follow," said Aletha Tom, Chairwoman of the Moapa Paiute Tribal Council. "If our small Tribe can accomplish this, then others can also. There are endless opportunities in renewable energy, and Tribes across the nation have the available land on which to build them."

Moapa Southern Paiute Solar, LLC (a subsidiary of First Solar Electric, LLC) is the project owner and will construct the project using First Solar's advanced photovoltaic (PV) thin film solar modules. The project will be built on 2,000 acres of land on the Moapa River Indian Reservation and include an onsite substation and a new 5.5 mile 500 kV transmission line that will connect the project to the existing Crystal Substation, serving energy users in California.

"First Solar is thrilled to celebrate this important milestone with Senator Reid and distinguished guests, and honored to work with the Moapa Band of Paiutes on this landmark project," said Jim Hughes, CEO of First Solar. "By working together, we will provide jobs and significant economic benefits to the Tribe and Clark County as well as helping LADWP deliver clean, renewable energy to its customers."

Once the Moapa Southern Paiute Solar facility becomes fully operational, LADWP will be able to repurpose existing transmission systems that now bring high-carbon coal power from Navajo Generating Station. The Moapa plant, along with a second utility-scale solar power plant in that region of Nevada, will enable LADWP to stop receiving coal power from the Navajo plant by the end of 2015, four years before it is required by California state law—reducing greenhouse gas emissions by 8.4 million metric tons (MMT) between 2014 and 2019 cumulatively. The renewable energy from the two solar power projects in Nevada will contribute over 4 percent to LADWP's goal of 33 percent renewable energy by 2020. 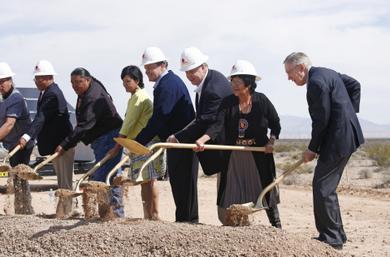