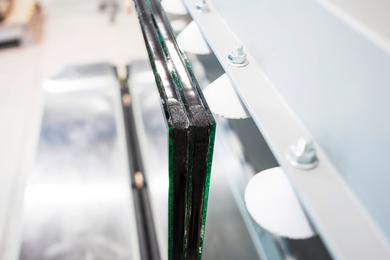 Quality is now available at every corner

LiSEC has re-engineered the vertical sealing machines of the VFL series. The result is clear. With the new VFL system, dubbed "CleanSeal", even less effort is required overall to eliminate or prevent dirt, and the sealing quality of the corners is considerably improved. This results in significantly reduced production times.

The self-learning CleanSeal got off to a clean start

When developing the CleanSeal, the focus was put on increasing the overall quality of the end product. A key factor here was the level of material spreading that occurs. In conventional systems sometimes - depending on the operator's experience and instinct - too much sealant is applied around the corner. This excess material can lead to contaminate the units and the transport device. The solution: LiSEC developed a highly-dynamic, self-regulating, servo-controlled mixing/metering system. "Instead of designing a system that is 'more resistant to contamination', we developed a solution that ensures that less contamination is produced", said Alexander Kronsteiner, Head of Product Management at LiSEC. The new mixing/metering system detects temperature fluctuations and changes in viscosity caused by the differences between batches, etc. or by downtimes, and is self-adjusting, making manual re-adjustment unnecessary if changes occur. The new stationary mixing/metering unit enables precise metering without material slippage thanks to a large material flow range (up to 1:10). Kronsteiner continued: "All in all, we improved the mixing/metering quality tenfold".
The developers took a further step towards contamination thanks to optimised centering (positioning) of the glass sheets, which also results in considerably less glass breakage.

The perfectly sealed corner – faster and with less effort

The CleanSeal concept also includes a re-design of the corner rollers for optimum material distribution in the corner area. "Until now, its function was more to correct the corners, and now it's advanced to finishing corners", said Kronsteiner. The entire system is so cleverly devised that a single operator can complete all of the steps. In particular, the process for "dabbing the corners" has been almost completely eliminated.

The LiSEC engineers also optimised the user guidance and made the settings even easier, such as the self-calibration of the depth scanner for changing nozzles and material. They also developed the automatic flush and mixing process via pressure progression measurement. The number of parameters has been reduced and the recipe tree minimised. This makes it easier to operate and results in shorter computing times. Kronsteiner: "All the optimisation measures allow for shorter cycle times. With triple units from 1200 to 800 mm, the cycle time is now only 33 seconds.” The pneumatic coupling device between the system and the material line is not only ergonomic, it also ensures a simpler exchange of materials.

The CleanSeal metering unit is a robust solution. LiSEC relied on proven technologies to make sure of this. For example, instead of wear-prone gear pumps that are comparably expensive and inaccurate, it utilises a servo-controlled throttle valve. Sealing material is applied as long as possible with open controllers. The material is optimised and controlled through the open flow and the material flow is only throttled in the corner area. In addition, there is no dynamic mixer, but rather a shortened mixing section featuring significantly reduced material consumption during rinsing.