At the end of August, the last of the total of four production plants for TROSIFOL polyvinyl butyral (PVB) film were linked up to the new Mowital raw materials warehouse (PVB resin). The first plant has been supplied from there since the middle of August, and the other three have since joined in succession. At the end of the year, the new fifth plant for the production of special automotive films will be served by this central raw material warehouse as well. A smooth supply of raw materials is thus assured for all the production lines at the location.

The central element of the new central raw materials supply is a fully automatic tunnel racking system. Here 24 big bags are stored one behind the other in racks (tunnels) and removed from the front with a driverless shuttle. A laser navigation system steers the shuttle – an unmanned forklift truck (FLT) – to a conveyor belt on which the big bag is carried to the production plant in question.

When its battery depletes, the shuttle runs automatically to the charging station. There the battery is manually changed so that the shuttle can continue to work without interruption. Should the control system ever fail, the shuttles can also be operated manually at any time. A warehouse employee then simply takes his seat on the shuttle and drives it like a conventional FLT. Two such shuttles are currently in use, and there is space for a further unit.

The SAP software, warehouse management and shuttle control are interlinked via an interface. This means that for the employees in charge goods input and output are visible in real time and inventory management is always right up to date. 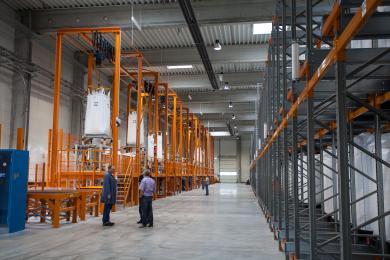