Optimism at glasstec 2014 tangible at the Kuraray stand

"Best of Both" presentation goes down well with customers

"Exhibitors are upbeat about the prospects for the future and visitors were highly satisfied," is how Messe Düsseldorf is summing up the mood of glasstec 2014 that came to an end on Friday last week. A total of 1,217 exhibitors were delighted with the roughly 43,000 trade visitors over the four days.

]"There has been a definite improvement in the mood at this fair over previous years. The difficult times for the glass industry seem to be slowly drawing to a close. Even so, we shall still have to study the coming economic forecasts closely," said Jörg Theesfeld, Director PVB Film Business der Kuraray Europe GmbH, giving his verdict on Kuraray´s participation.

Kuraray devoted plenty of space at its 120 square metre stand to meetings with customers. This was the first time since the takeover of Dupont´s GLS/Vinyls activities that TROSIFOL and SentryGlas employees have appeared together at a fair stand and represented a single company. "Best of Both" is the motto that Kuraray was communicating to customers at the fair, meaning the best of both worlds. Christoph Troska explains: "We are now in the unique position of being able to offer our customers not only our comprehensive PVB product range, but established ionomer technology as well. glasstec was an important platform for publicising this new state of affairs."

This strategy went down well, as the countless meetings with customers demonstrated. Nor were there reservations about the new colleagues and not a trace of hesitancy or rivalry.

Kuraray organised two happy hours at the stand to lighten the atmosphere of the day´s talks. The response was such that uninvited guests had to be politely reminded of the internal nature of the event.

Steven Clough, Global Business Manager, was also highly satisfied with the fair: "The quality of the exhibitors, the volume of trade visitors and the innovative accompanying programme once again confirmed glasstec´s worldwide flagship status." 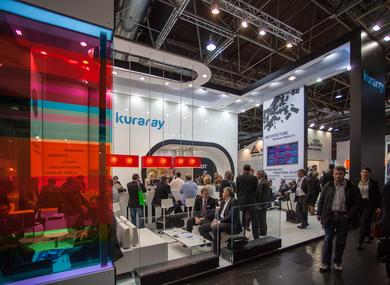