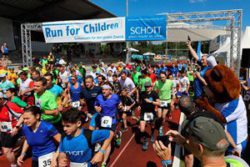 Ready, set, go: The Chairman of the Board of Management of SCHOTT Dr. Frank Heinricht fired the starting shot for the Run for Children. Photo: SCHOTT / Alexander Sell