Record Photovoltaic Module Production and Shipments Forecast Through the First Half of 2016, IHS Says 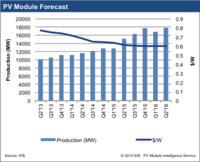 Strong solar photovoltaic (PV) production and shipments are forecast during the first half of 2016, due to installation deadlines, sunsetting solar tax credits and other policy dynamics of the two largest global solar markets, China and the United States. Global solar PV installations are forecast to increase by 33 percent in 2015, to reach 58.7 gigawatts (GW). Demand will remain strong, but growth will slow to 12 percent in 2016. Global solar PV demand will reach 65.5 GW next year, according to IHS Inc. (NYSE: IHS), the leading global source of critical information and insight.

Strong PV demand, and supply restrictions to the U.S. market created by anti-dumping trade disputes, will prevent prices from falling in the first half of 2016. Most tier-one module and wafer suppliers will experience limited product availability until the second quarter (Q2) of 2016, partly due to high demand from installations in China and the United States. “Given the current shortage, wafer prices might still rise for a few months, despite declining polysilicon prices,” said Edurne Zoco, Senior Manager and Principal Analyst, IHS Technology.

The additional quota announced by China last month will be connected by June 2016, in order to receive 2015 incentives, and at that point the majority of modules for large ground-mounted U.S. projects are also expected to be completed. For these reasons, average selling prices (ASPs) along the module value-chain are forecast to fall in the second half of 2016.

“Global PV demand for 2017 will slow, which will adversely affect module ASPs and margins in the second half of 2016,” Zoco said. “There will be some buildup of inventory, and module price declines will be much heavier than they were in 2015 and during the first half of 2016. A slump in global PV demand in 2017 looks increasingly likely, as the United States is expected to suffer a major decline in 2017, following planned significant reductions in the country’s investment tax credit.”

Stalling utility-scale project development in 2017 will lead to a predicted 7.8 GW decline in annual installations. The remainder of the global market will grow by 11 percent; however, this growth rate will not entirely counter the sharper decline in the United States, which will cause the global market to fall by low single digits in 2017. “It’s important to note that new policy regulations and incentives in other global markets could mitigate some of the forecasted slowing growth in 2017,” Zoco said.

The PV Module Intelligence Service provides detailed and accurate data on the raw materials used to produce solar PV energy. For information about subscribing to this service, contact the sales department at IHS in the Americas at (844) 301-7334 or AmericasLeads@ihs.com; in Europe, Middle East and Africa (EMEA) at +44 1344 328 300 or technology_emea@ihs.com; or Asia-Pacific (APAC) at +604 291 3600 or technology_APAC@ihs.com.