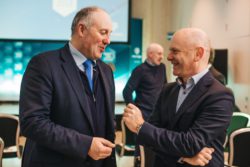 Steve began his two-year term on January 1 taking over from Encirc’s Adrian Curry, who served as president from 2017.

He has been Managing Director at Saint-Gobain since 2013 and is currently a member of the board at British Glass.

“We are delighted to have Steve as our new President, and I’m sure the industry will be too.

“Steve’s dedication to the glass industry is exemplary and I’m sure his character and commitment will continue in the footsteps of [former president] Adrian Curry to help us guide our industry’s needs through these uncertain times for the UK manufacturing sector.

“I would also like to sincerely thank Adrian for his tireless work and dedication to the role for the past two years. He’s been a fantastic support to me and the whole team at British Glass and a real source of inspiration.”

“I am proud and honoured to take up the role as President of British Glass and to combine with them to continue to promote the exceptional contribution of the glass industry to the UK manufacturing scene, and help represent the industry at national level in order to further promote its success and contribution.”

The announcement was made at the British Glass Annual General Meeting on November 22.