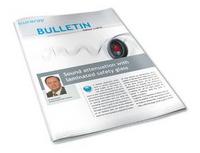 With a series of technical bulletins, Kuraray, a leading manufacturer of PVB and ionoplast films, is now filling gaps in the knowledge of interlayers for laminated safety glass. The first issue is devoted to sound attenuation. Further issues on other subjects are due to follow.

With its SentryGlas®* and TROSIFOL® products and other brands, Kuraray ranks today as the world's leading manufacturer of films for laminated glass in the architecture sector. Day after day, through its products, the manufacturer passes on a wealth of experience and expertise to customers and others worldwide. To organise this information more neatly and to meet specific demand in the marketplace, Kuraray has taken the step of issuing a "library of knowledge" on particularly relevant and intriguing subjects in the form of a series of bulletins.

The purpose of this new series is to straightforwardly and comprehensibly impart knowledge on the huge field of glass interlayers and their advantages.

The current and just published first issue deals with how sound is attenuated with laminated safety glass. Dr Bernhard Koll, author of the first issue, first gives an account of noise sources and their impact on human hearing. In doing so, he sheds light on the decibel, a difficult and often misunderstood unit of measurement, and quotes examples of how people perceive different noise sources.

Koll goes on to distinguish different ways of achieving sound attenuation and explains mono- and trilayer PVB films and how they work. Trilayer PVB films (a thin, soft layer between two normal layers) are used in automotive glazing and architectural glass; monolayer films (consisting of a single soft layer) can be found exclusively in architectural applications.

The first bulletin is available for download as of now in German and English.

Further issues in German and English are planned and will also be concerned with topics of key interest.