Stevens Pioneers a Post-Hurricane Sandy World With SURE HOUSE

Inspired by Hurricane Sandy, SURE HOUSE takes a new direction in storm-resilient coastal housing by combining the architectural feel that characterizes the Jersey Shore with 21st-century technology and fiber-composite materials repurposed from the boat-building industry. (Courtesy of the Solar Decathlon 2015 Stevens Institute of Technology team)

When Hurricane Sandy crashed into the East Coast in October 2012, it caused an estimated $65 billion in damages along with untold human misery. But something positive has come from that disaster. The superstorm inspired the Stevens Institute of Technology’s U.S. Department of Energy Solar Decathlon 2015 project.

“Sandy devastated a lot of the coast, including Hoboken, New Jersey, where Stevens is located. And many of the students involved on the team are from New York and New Jersey and were affected, or had families affected, by power outages and damage from the storm,” says decathlete A.J. Elliott, a Stevens graduate student.

“We knew at that point that we wanted to address not only sustainability but also resiliency with our design—to combat rising sea levels and increased storm activity,” he says.

The 40-member team came up with a play on words for its Jersey Shore house: SURE HOUSE. The name derives from “SUstainability” plus “REsiliency” and is intended to reflect a structure that can mitigate climate change as well as survive the real effects of global warming such as savage storms.

But the team didn’t want to follow the typical post-Sandy trends.

“The general reaction to Hurricane Sandy was to put houses up on stilts. That’s still the practice, so these homes don’t have porches—and feel out of place,” Elliott says.

This is especially noticeable because the Jersey Shore comprises tight-knit communities with towns that typically have open spaces for people to gather. Stilts stifle that characteristic.

By pioneering a different way, “we’re trying to develop a prototype where we don’t necessarily have to do that,” he says. “We wanted to maintain this ’70s and ’80s architectural feel that is the Jersey Shore in combination with 21st-century technology.”

The 1,000-ft2 living space flows to an exterior deck. Although replicating the cottage style on the exterior, the core building principles result in 90% less energy use through “Passive House” techniques (a German concept stressing tight building envelopes to reduce air conditioning demands), net zero-energy use with solar power, and a resilient energy hub.

That hub is key.

“Solar arrays won’t work when power is out unless you have a battery backup system,” Elliott says—but those backups aren’t allowed in the Solar Decathlon.

Instead, Stevens is equipping SURE HOUSE with a special, commercially available inverter that can continue to produce power even after a blackout. The house will also have an outdoor USB charging outlet that allows neighbors to come by and charge their portable devices.

“That way, they’re not without communication shortly after a storm, when there are a lot of emergencies to be dealt with,” he notes.

And as a final addition, the Stevens team is drawing from the marine industry for its technologies and materials, using composites that can repel storm damage as well as everyday salt water.

Solving a local problem appeals to Elliott because even though he was in Philadelphia when the hurricane hit—working for a utility dealing with some of the storm aftermath—he grew up in New York City.

Being in his first Solar Decathlon is also a dream come true. He began tracking the event in high school and visited his first competition in 2007—and he’s been to every one since.

“This is my first go-round, but Stevens’ third,” he says.

It was the school’s participation in 2013 that drew him to enroll in its Product Architecture and Engineering program, which is deeply involved in the Solar Decathlon.

The team hopes that after this year’s Solar Decathlon, SURE HOUSE will find a permanent home on the Jersey Shore—where it can serve as a model for others who want to sustain traditions in the face of changes that threaten to erode not only beaches but also the fabric of community life. 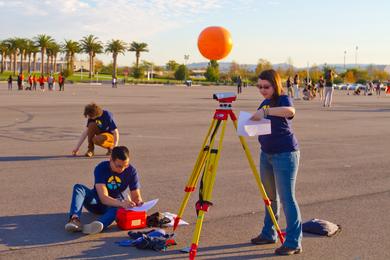