As we hurl past the darkest period of the year, let's hear it for some bright news on the sustainable energy front.

This is one of the highest efficiencies recorded at this concentration. The energy conversion efficiency of a solar cell is the percentage of sunlight converted by the cell into electricity and the Holy Grail of the solar industry. Currently the standard conversion rates vary between 10 and 15 per cent.

This low-cost approach, which Semprius executives say can cut manufacturing expense by 50 percent, caught the eye of energy giant Siemens, which this year took a 16 percent stake in Semprius, as part of a $20 million investment from venture capitalists.

Semprius has grown from a small electronics start-up to a prospective game changer in the solar cell, sustainable energy world thanks to seed money from the Department of Energy via the SunShot Incubator Program based at the NREL. Semprius earned one of SunShot Incubator's four spots in 2010.

The company's genesis can be traced back the University of Illinois, where Professor John Rogers and his team developed the transfer-printing process initially intended for flexible electronics. It didn't take long for Rogers to realize that applying the technology to a concentrated photovoltaic (CPV) design could be more lucrative.

"We're using a completely different approach to what has been practiced," said Kanchan Ghosal, CPV Applications Engineering Manager and the principal investigator for Semprius' PV Incubator Award. "This approach uses micro-cells and transfer printing to significantly reduce the use of materials in highly concentrated PV modules. And it provides a highly parallel method to manufacture the module, based on established microelectronics processes and equipment."

Earlier this year, Semprius broke ground on a manufacturing plant in Henderson, NC. The state of North Carolina and local agencies contributed $7.9 million to the 50,000-square foot plant, which is expected to employ 256 people when it's fully operational. The plant is expected to start operating next year, with an initial capacity of five megawatts, eventually growing to 35 megawatts.

The available market for highly-concentrated photovoltaics is expected to double or more each year over the next nine years, reaching greater than 10 gigawatts of power by 2020, according to Semprius CEO Joe Carr.

Semprius first looked at using its micro-transfer printing for solar cells in 2007, with the help of a "Next-Gen" grant from DOE's Office of Energy Efficiency and Renewable Energy.

The modules to be made in the North Carolina plant starting next year will be 24 inches by 18 inches, and about 2 and a half inches deep, have a concentration of more than 1,100 suns and an efficiency of more than 31 percent. These modules would be cost- competitive with fossil fuel technology at high volume.

"A lot of the early benefits were from the testing NREL could do. NREL has an internationally recognized testing program," Ghosal said. "It's one thing to claim a particular output, but something different to say that it was validated at NREL. It gives that stamp of credibility." 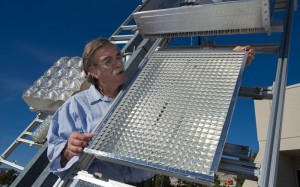