Today in the town of Tube Kumtorkalinskogo district headed by the Deputy Prime Minister RD Rizvan Gazimagomedov held a meeting to discuss the process of the Caspian of a sheet of glass.

In discussing the project, in addition to the board of directors of an undertaking, was also attended by heads of ministries and departments.

Caspian sheet glass factory - a large-scale private investment project, which will cost 10.5 billion rubles. The project includes the construction of an industrial enterprise for the production of float glass with a capacity of 600 tons of output per day. It incorporated the latest technology of the glass industry. The plant will produce both tinted and reflective types of glass.

Opening the meeting, Rizwan Gazimagomedov noted that to date, the project of "Caspian sheet glass factory" is ahead of schedule, no problems with financing. Many of the questions do not even need to be discussed, as are performed according to plan, without delay. Been resolved gas and electricity companies.

"Completion is scheduled for August 2013 - then should leave the assembly line first glass. The only thing that can prevent this - is that sometimes lack the necessary communication between the actors involved in the project. There is still uncertainty with the decision of the land question. Kumtorkalinskogo district administration jointly with "Energostroy-MN" for three days had to decide on the route of the high-design the shaft from PS "Artem" to PS "Glass." Trails are defined, but there is no evidence from the two owners of the land - the Ministry of Property Relations of the RD and the administration of the village of Alma. But the question for a few days will be a decision ", - said R. Gazimagomedov.

Technical Director of the Caspian float glass plants Axel Trester said that the problems with the project not because the leadership of the republic and provides significant support for this issue.

"This is the largest international project at the highest level. The plant will produce the best quality products. Will soon be imported equipment from Germany, Italy, France and Belgium ", - A. Trester.

In conclusion the CEO KZLS Abakar Mudunov added that in September this year to visit Dagestan executives, who in the future will be delivered to the plant equipment. 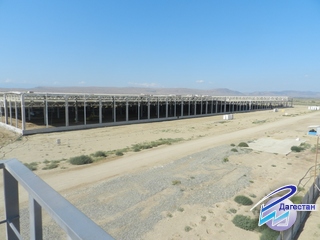