glasstec 2012 in Duesseldorf, Germany, was the scene of the latest triumph for leading US glass processing equipment manufacturer GED Integrated Solutions.

This was the first time that GED had exhibited at glasstec – and the decision proved to be another resounding success for the company.

And then it won the US Window & Door magazine’s Crystal Achievement Award for Most Innovative Machine in the category Glass/IG Processing.

With triple units being heralded as the future standard of the glazing industry to counter the endlessly rising costs of energy to heat our homes, there was no doubt that the winning technology of the ATLAS IG production system would command the attention of many of the world’s leading sealed unit manufacturers at the show.

And so it proved.

With many hundreds of visitors to the stand where live demonstrations were being held throughout the event, not only did GED log close to 300 international leads from 72 countries, but the exhibit itself was also sold from the stand!

The new customer is UK-based Techniglass, a leading IG manufacturer whose modern factory in Mid-Glamorgan, Wales, supplies window fabricators and installers all over the country. The company is keen to be in a leading position for the rapid supply of triple-glazed units but sees the flexibility of ATLAS in also producing dual units every 10 seconds as an added bonus.

“Triple glazing is rapidly becoming more popular with both specifiers and homeowners alike, but the normal production process is slow, cumbersome, and fraught with potential for handling mishaps. This means the process is costly.

“ATLAS is an automated stand-alone solution to the demand for double and triple unit production and is adaptive to a range of combinations, including standard spacer and Warm Edge systems, small and large units, dual and triple-glazed, and in any order or combination of these.

“The process is fully automated and facilitates a modern ‘No-Touch’ approach to IG production that virtually eliminates breakages or remakes due to handling errors or accidental finger marking and scratches. 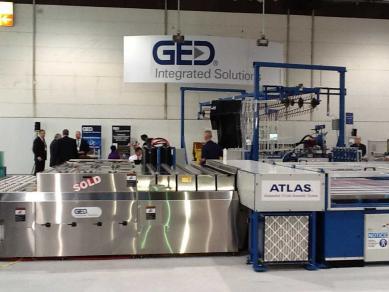