German glass machinery manufacturers continue to expand their global market leadership position. Their efforts are backed by the German Engineering Federation VDMA, home to well more than 90% of manufacturers. Visitors attending glasstec, the world’s leading trade fair, which is held in Düsseldorf from October 21 to 24, 2014, can look forward to a dazzling display of innovations.

Thanks to new products, services and strategies, German glass machinery manufacturers continue to expand their global market leadership position. Take, for instance, glass machinery manufacturer Grenzebach, which for some time has worked feverishly on developing from a conventional automation provider into a solutions provider of complete manufacturing plants. Commenting on this Robert Luxenhofer, Sales Director for the display segment, says: “Our goal is to invest in new technologies and gain a deeper understanding of factory processes.” The company has successfully tackled the first steps on this path. For example, it has already successfully marketed and sold systems for loading and unloading display coaters for TFT displays since 2009. Right now about 50 such systems are deployed across the globe. The future, however, belongs to organic light-emitting diodes i.e. OLEDs. Displays manufactured with this technology offer countless advantages over TFTs, which are still common today, including a far sharper picture, a significantly wider viewing angle and sharply reduced energy consumption.

That was reason enough for Grenzebach to explore the topic further, resulting in equipment for loading and unloading display coaters for OLED displays. Its functions parallel those of the TFT display system, but the technology used in its implementation is fundamentally different: In contrast to TFTs, which are produced using the cleanroom procedure, the OLED manufacturing process takes place in an ultra-high vacuum and thus in an airless space. The requirements, says Luxenhofer, “are decidedly more stringent.” Among other things, neither the usual way of transporting the panels by gripping and suctioning them nor current drives can be used in a high vacuum environment. But Grenzebach technicians have found practical solutions based on the existing system for loading and unloading TFT display coaters. “We modified the line accordingly,” says Luxenhofer, the sales director, as he tries not to reveal too much information. Just this: The screws alone, made of silver, are worth about 30,000 euros per line.

A holistic strategy
Grenzebach’s work in the architectural glass segment offers further evidence of the company’s holistic strategy. In September of last year, the manufacturer started offering complete turnkey packages, which include the necessary equipment for coating. In fact, says Dr. Jens Ellrich, who heads the coating technology department, they come “with everything that goes along with that, including process engineering.” The aim is to leverage glasstec to introduce the topic to a broader trade audience for the first time. Moreover, says Ellrich, the company is able to service not just its own equipment but also machinery and plants from virtually any other manufacturer, especially those made by manufacturers that have since disappeared from the market. Says Ellrich: “Our team consists of experts from a range of coating industry segments. The prerequisite expertise is definitely there.”

Innovative simulation software
Triple-pane insulating glass has been on the market for quite some time now, but so-called TCO software – which the manufacturer will also present at the trade fair – is new. It lets users quickly and easily simulate the entire production process for any insulating-glass line supplied by Bystronic glass. Among other things, the software calculates exact cycle times, material quantities and the cost per unit of insulating glass. Even logistics expenses, including labour costs, can be calculated with extreme precision – if necessary, down to the last euro. What really turns the tool into a show-stopper, though, is its ability to simulate any change whatsoever in the plant’s configuration. The various components can also be exchanged freely. Moreover, simulations for various warm-edge spacer materials can be run. Not only do data collected in this way facilitate the rapid and uncomplicated optimisation of production processes on existing lines, they can also be used for high-precision alignments of the way the lines function and the needs of customers. Even exact ROI calculations are possible in order to figure out the time it takes to amortise expenses for new lines or newly installed components. The same is true for side-by-side comparisons of complete production lines in various configurations.

However, a prerequisite for all this is that the complete set of parameters and data points necessary for the calculation is available. And only the customer can provide that. All in all, says Tobias Neff, the Production Manager in charge of solar technology at Bystronic glass and the creator of the software, the tool allows for signification cost reductions, depending on the configuration of the equipment. And as if that weren’t enough, companies – at least those based in Europe – receive another crucial benefit: The software helps them to secure EU grant money available to businesses when they introduce new production technologies with reduced emissions of harmful CO2 that are more eco-friendly than the ones they replace. The software makes it easy to generate the required proof demanded by the authorities. The tool, says communications manager Nischwitz, has been “extremely well received” by customers. He added that Bystronic glass wants to be more than a mere provider of manufacturing equipment, aiming instead at becoming a solutions provider in a more general sense. “We want customers to know that we don’t just understand this process from a technological but also from a business standpoint.”

Even though every company that deploys Bystronic glass’s software receives a PDF file with the data calculated for their plant, they don’t get the software itself. “We’re guarding it like gold,” says Neff. No wonder – it’s based on experiences collected, often painstakingly, over the course of many years. 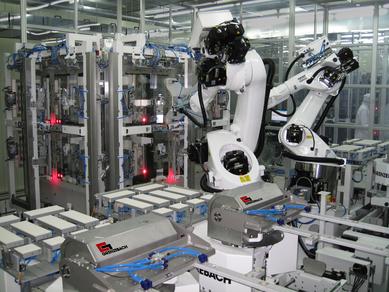