The milkman is making a comeback.

A Tulare County dairy operator is planning to open a creamery this summer to bottle his own milk, and he'll do home delivery.

"The way it is now, our milk gets consolidated with everyone's milk," said Ron Locke of Top O' The Morn Farms in Tulare. "But we want to be able to showcase our dairy and the attention we give to producing a quality product."

While the idea may seem like a throwback, it's one that's getting more attention as Valley dairy operators tap the growing interest in local, high-quality foods and try to create new sources of revenue.

In a few months, Tulare may have two options for locally produced milk. Besides Top O' The Morn Farms, Rosa Brothers Milk Company plans to sell its own pasteurized milk along with other dairy products.

The two micro-milk plants hope to join the handful of dairies in the state using glass bottles and run by a dairy owner.

While the concept is not new to the dairy industry -- small, dairy-run milk plants are more common in other states such as Wisconsin, Pennsylvania and New York -- California's dairy industry has been built on a model of mass production.

In the Valley -- the heart of the state's dairy industry -- dairymen ship their milk to large-scale cooperatives and food manufacturers that produce mostly cheese, but also butter, milk and other dairy products.

Last year, sales of California milk and cream was valued at $5.95 billion. It's unclear how much of that was represented by the smaller players in the market.

Locke and the Rosas say their goal isn't to topple the big players; they just want greater control of their milk by developing their own brands.

"We really think there is demand for this," Locke said. "It just doesn't make a lot of sense that there isn't a Tulare or Visalia dairy that produces its own bottle of milk."

Locke has spent several years researching the concept, developing a business plan and working on marketing. And although he won't reveal how much he has invested, he said it's a considerable sum.

"When we bought state-of-the-art pasteurization equipment, I called it my stainless steel Ferrari, because it cost just about as much," Locke said.

Locke plans to produce about 1,000 gallons of milk a week in the bottling and processing plant he's building at the dairy. The milk will be sold in half-gallon glass bottles, and he will offer it in whole, 1%, 2%, half and half, and chocolate. Other flavors may follow. And he'll provide home delivery.

Small-scale milk producers say they prefer glass bottles because it keeps the milk colder and prevents other flavors in the refrigerator from leaking into the milk.

Locke said he plans to start with home delivery in the Tulare and Visalia areas. Deliveries will be made in insulated containers during the evening. If all goes well, he'll add local artisan cheeses and farm-fresh eggs, along with other specialty food products, to his delivery options.

Noel and Rolland Rosa also are planning a milk-bottling plant. The Rosa brothers' dairy is east of Hanford, but they are renovating a 5,000-square-foot warehouse on South K Street in Tulare that will serve as a creamery and storefront.

The creamery will use reusable glass bottles and be able to produce up to 5,000 gallons a day. But, Noel Rosa said, it will probably pump out about 500 gallons a day to start. 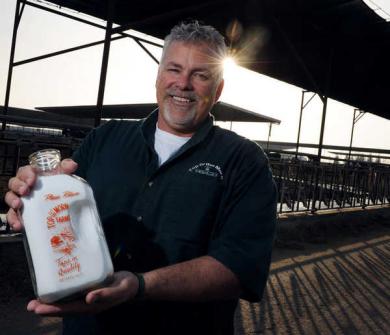