Officials from Viracon announced last week that the company will reopen its St. George, Utah, manufacturing facility in January 2015.

Viracon will make $2.2 million in capital improvements to its St. George manufacturing facility prior to opening in January. A significant portion of the investment will be used toward refurbishing the glass coater. Other equipment upgrades will also be made to ensure the fabrication processes meet Viracon’s high standards. Viracon expects to add up to 300 employees to its St. George operations throughout 2015, according to officials.

“Demand for commercial architectural glass has risen sharply in the last six months,” says Viracon President Kelly Schuller. “We are excited to welcome back the St. George team and look forward to strengthening customer service by taking this major step to increase our capacity. The reopening of St. George allows us to better align our overall capacity with levels of demand that are higher than we have seen in several years.”

Viracon weighed several options for increasing capacity prior to finalizing its decision to reopen the facility in St. George. The state of Utah, the city of St. George, and the Site Select Plus team were each instrumental in developing a solution that was beneficial for Viracon as well as the local economy, according to officials.

“Our St. George facility will be better than ever upon its reopening in January,” says Jason Fransen, plant manager. “We are confident in reopening our plant in St. George, and we believe this decision will result in positive benefits for our customers, employees, shareholders and the state of Utah.” 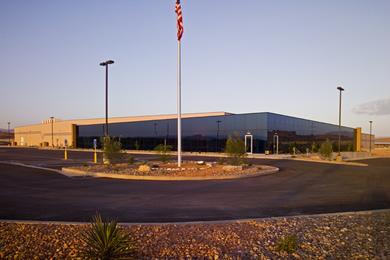