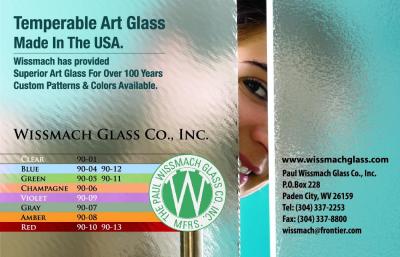 For more than 110 years the Paul Wissmach Glass Company Inc. in Paden City, West Virginia, U.S.A., has been creating colorful, rolled sheet glass for use in stained glass work.  Five years ago the company decided it was time to take on a new territory. “We have been producing glass for over 110 years for the art glass industry for uses in Tiffany lamp shades, church windows, fusing, the hobby market, etc.,” says Mark Feldmeier, president of the Paul Wissmach Glass Co. “With the decline in the art glass industry, due primarily to the difficult economic times of the last few years, we decided that we needed to develop an art glass product that could reach new markets.” Thus, the company decided to create its own temperable art glass. “We came up with the idea in September 2008 to develop a temperable art glass with a variety of colors and patterns not currently on the market,” says Feldmeier. “By March of 2009 we were ready to conduct our first test run at a local tempering facility, and it was immediately deemed a success. Soon after we introduced the product to a select few distributors to get their opinions on colors and textures and earlier this year we decided that it was time to introduce this product worldwide.” The product’s official launch was in September. The Hollander Glass Group/SGT Tempering is one company that is providing tempering services for Wissmach. “They have been customers of ours in the art glass industry for decades and because of this we have developed a very close relationship with them,” says Feldmeier. “The Hollander Group began tempering glass a couple of years ago and was willing to do much of our testing for us.” Feldmeier notes that in addition to Hollander they have several other tempering partners, including the Glenney Glass Company, Swift Glass Company and Coral Decorative Products. With the new tempered art glass, Feldmeier says his company is focusing on all markets that require a tempered glass product, and those that would like a decorative glass that is temperable, such as residential doors, windows, shower doors and partitions, among others. At this time he says there are hundreds of clear patterned glasses that can be tempered, but not many colored tempered glasses on the market. “We are currently offering 11 colors and 18 textures in the temperable art glass line and are open to adding custom textures not currently in our line and adding colors derived from our current art glass line,” he says. Feldmeier adds, “In addition to the solid cathedral colors that we now offer in the temperable art glass line our future plans are to mix two and three colors together in the same sheet of glass.”

Also, new for Wissmach Glass Company at Glasstec 2014 is the introduction of Wissmach 96 in addition to the Wissmach 90 that was introduced in recent years for the fusing markets.  Wissmach has a wide variety of colors and thicknesses available in both fusing lines.