In the fiscal year just ended, futronic GmbH generated sales revenues of around 10.2 million euros, beating its already excellent figure for the previous year by 1.6 million. This represents an impressive increase of around 19 percent. futronic got off to a successful start with its new Domestic Glass division and the first projects have meanwhile been completed. The share of sales from projects for customers outside the glass industry rose further to 35 percent. The extended production and development facility with six new workplaces will be up and running by the end of July. futronic is optimally placed to continue its steady growth trajectory as it enters the new financial period with its order books well filled and still on the lookout for qualified personnel.

"In the previous twelve months we recorded the best result ever in the history of the company and the fiscal year just ended has turned out to be even better", sums up Michael Preuß, Managing Director of futronic together with Wolfgang Lachmann since 2004. "We're absolutely satisfied."

Successful start for futronic's new Domestic Glass division
2012 was dominated by the successful launch of futronic's new Domestic Glass division. The first projects have meanwhile been completed and more orders placed – some of them quite sizeable. "It's an area with considerable potential because the industry is under pressure to modernise. futronic's new control and drive systems for presses and blowing machines have enjoyed a positive reception in the market. "The cooperation with Forma Glas, our Austrian partner, has certainly paid off", says Preuß.

futronic profits from catch-up effects and modernisation ventures
futronic's other divisions have likewise developed well, making a healthy contribution to the company's sales growth in the fiscal year from April 1, 2012 to March 31, 2013. Both Container Glass and Industrial Automation have profited from intensified sales activities worldwide in the last few years in combination with catch-up effects. Various projects that had been put on hold were addressed by customers and realised during the period under review. Preuß is confident that "the upward trend will continue, albeit much more subdued than in the past because our new Domestic Glass and Industrial Automation segments will first of all need to stabilise at today's high level".

Growth opportunities in South-East Asia and Latin America
The order situation and the level of development and production capacity utilisation in the fiscal year just begun are excellent. The focus in the container glass industry – futronic's core market – is on the modernisation projects presently in the pipeline at several manufacturers. "Many glass producers are planning to upgrade their older generations of futronic control systems in the next few years, to enable them to meet the ever higher requirements of bottlers and end customers", Preuss continues. More and more manufacturers are opting for futronic technology or considering replacing rival products with controls and drives made in Tettnang. Preuß: "We'll definitely have a share of the cake". The opportunities for further growth are particularly strong in the glass markets of South-East Asia and Latin America, where he sees his company in a very favourable position with its existing customer base and sales representatives.

Share of sales from non-glass projects rises to 35 percent
futronic also has its sights set on new industrial automation projects, "which we intend to tackle during the new fiscal year", adds co-Managing Director Wolfgang Lachmann. A number are already at the quotation or project planning stage, for instance for plant and equipment manufacturers in the bulk solids handling segment. The Industrial Automation division's share of total sales increased from 33 percent in the corresponding period of the previous year to 35 percent this year. "It's a line of business we hope to develop further in the next few years", Lachmann explains.

Tettnang facility extended – desperate search for skilled staff
futronic has responded to the growth in sales by expanding capacities at its Tettnang facility, where about 800 square meters have been added to the production shop and administrative offices. The total investment amounts to around one million euros. New workplaces have taken shape here for information technicians as well as automation technicians and engineers. In spite of this, futronic is still desperately seeking several qualified staff. Preuß: "We're especially looking for developers and programmers of PLC applications and embedded systems along with engineers and technicians specialised in electrical design." The Tettnang control system specialist currently provides work for seventy permanent employees and six trainees. 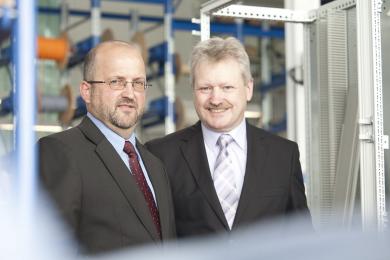